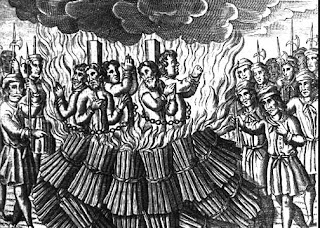 Christianity borrowed and adapted from older religions, and the New Testament is, arguably, little more than a palimpsest. But perhaps the objection is more fundamental than that. The original parchment is, of course, Judaism, and prior to the advent of St. Paul Christianity was little more than a Judaic heresy.

Yes, the foundation is Judaic but it proceeds by way of an almost total misunderstanding, or, perhaps, a deliberate perversion of the mother tradition. The Messiah, the anointed one, of the Old Testament, is a figure who combines both spiritual and political power. He comes as an earthly ruler and spiritual authority, a judge rather than a saviour of souls; his power is of this world. Mohammed might be said to have been such a figure, and there have been others, pretenders of one kind or another, in both the Jewish and the Muslim tradition. But Jesus is not to be perceived in such a light, for the simple reason that the Messiah was not and could not be the son of God. For if God is one, indivisible and absolute, such a claim is logically absurd; it is also heretical.

So, Christianity, as a religion, is founded on a fallacy, an error of interpretation, and a heresy. So, has belief in itself been enough to give life to their God, to their Messiah, to their Christ? Perhaps it has, but it has also given rise to theological and philosophical problems beyond all resolution. However, there is another question, even more fundamental. Is it possible for a mortal to become God? Would belief in itself be sufficient to invest you or me or any of us with divine and miraculous powers?

Well, again perhaps, though it is not a question that I can answer. All I will say that if it is possible to give life to a god it is equally possible to kill him, and the Christians have been doing that, in their several ways, for well over a century.

Here the madman fell silent and looked again at his listeners; and they, too, were silent and stared at him in astonishment. At last he threw his lantern on the ground, and it broke into pieces and went out. "I have come too early," he said then; "my time is not yet. This tremendous event is still on its way, still wandering; it has not yet reached the ears of men. Lightning and thunder require time; the light of the stars requires time; deeds, though done, still require time to be seen and heard. This deed is still more distant from them than most distant stars---and yet they have done it themselves.
It has been related further that on the same day the madman forced his way into several churches and there struck up his requiem aeternam deo. Led out and called to account, he is said always to have replied nothing but: "What after all are these churches now if they are not the tombs and sepulchers of God?"
Posted by Anastasia F-B at 16:09