Of a Gay King and a Red Hot Poker 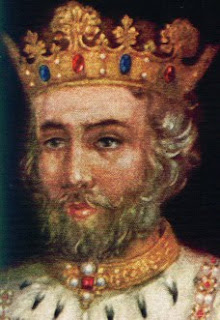 It is often claimed that James I was homosexual, though this is a contention that cannot be proved conclusively; it is unknown and unknowable. This is also true of Edward II, though to a far lesser degree, and there is enough material to make out a good circumstantial case, if one were so minded. So, at my peril, here it is.

Piers Gaveston, Edward's greatest friend, was introduced into his household by his father, seemingly as a suitable role model for the young prince. Later the Chronicle of the Civil Wars of Edward II was to claim that an immediate bond formed between the two; that Edward felt such regard that "he tied himself against all mortals with an indissoluble bond of love." The first contemporary reference we have is from a letter written by Edward himself in 1305, after the King had reduced his household, separating him from Gaveston and Gilbert de Clare, another young knight. In this he urges his sister Margaret to persuade Queen Margaret their step-mother, to intervene with the King to allow both men to return-"If we had those two, along with others we have, we would be greatly relieved of the anguish which we have endured and from which we continue to suffer from one day to the next."

Both were eventually restored, but in 1306 Gaveston was banished for unspecified reasons. He was only allowed to return after the King's death in the summer of 1307. It is now that expressions of disquiet become ever more evident in the sources, including that given by the Vita Edwardi Secundi. Robert of Reading goes even further in the Flores Historiarum, saying that Edward entered into 'illicit and sinful unions', rejecting the 'sweet embraces of his wife.' In the Chronicle written by John of Trokelowe, Edward no sooner brought his new bride, Isabella of France, to England after their marriage at Boulogne in 1308, than he rushed to greet Gaveston, showering him with 'hugs and kisses.' During the Queen's coronation Edward's attentions to Gaveston, and his neglect of his bride, caused her uncles, Louis de Everaux and Charles de Orleans to storm out in anger. That same summer Isabella wrote to Philip the Fair, her father, complaining of ill-treatment.

The final piece of evidence comes in the spring of 1312 when Edward fled in the company of Gaveston from the Baronial forces of Thomas of Lancaster, abandoning jewels, plate and his pregnant wife in his haste.

None of this amounts to a conclusive case-and one always has to be mindful of the bias in Medieval sources-, but it shows both an astonishing lack of judgement and degrees of intimacy with a single individual that exceeds all reasonable fraternal bonds; a degree of intimacy that would seem to go beyond mere considerations of personal loyalty. Edward was a king who came close to losing his throne not for the love of a woman but for his love of a man, in whatever form that was expressed.

He was later deposed by Isabella and her lover, Roger Mortimer, disappearing behind the walls of Pontefract Castle, where it was later claimed that his bowels were burnt out by the insertion of a red hot poker, a comment, I think, by chroniclers on his supposed sexual tastes
Posted by Anastasia F-B at 16:35