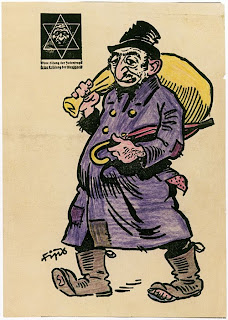 What, can such a thing exist? Oh, yes, it can! I would refer any who are interested in this in the first instance to On the Jewish Question by Karl Marx, ripe in ostensible anti-Semitic sentiments along the lines of the following

What is secular cult of the Jew? Haggling. What is his secular god? Money. Well then, emancipation from haggling and money, from practical, real Judaism would be self-emancipation of our age.
The Jew is perpetually created by civil society from its own entrails.

He was later to refer to Ferdinand Lassalle, a fellow socialist, though not one to Marx's taste, as a 'Nigger Jew'. Distasteful, I know.

There is also the tragic figure of Otto Weininger, an Austrian philosopher, who committed suicide at the age of twenty-three. His magnum opus, Geschlect und Charakter (Sex and Character), is chiefly a rather repellent essay in misogyny, though he also contrasts the perceived deficiencies of his fellow Jews with the 'manliness' of the Aryans. Anyway, you might get a flavour of the book from this;

Greatness is absent from the nature of the woman and the Jew, the greatness of morality, or the greatness of evil. In the Aryan man, the good and bad principles of Kant’s religious philosophy are ever present, ever in strife. In the Jew and the woman, good and evil are not distinct from one another ... It would not be difficult to make a case for the view that the Jew is more saturated with femininity than the Aryan, to such an extent that the most manly Jew is more feminine than the least manly Aryan.

To be fair, I should add that that his work was admired by such figures as Ludwig Wittgenstein, though this did nothing to stop the Nazis using it selectively in their own propaganda.

There were others not beyond expressing some anti-Jewish sentiment to ingratiate themselves with the host community, and here I am thinking specifically of Walther Rathenau, industrialist and politician, who in a publication of 1897 described his fellow Jews as an 'oriental horde' camping on German soil. He was casting himself here as an educationalist, urging his co-religionists to discipline themselves, adjusting to 'German values', so they would no longer be the subject of derision. In later publications he corrected himself, coming to believe that his strictures had been too harsh, though he continued to draw contrasts between Germans and Jews in his later writing, generally disadvantageous to the latter.
Posted by Anastasia F-B at 18:37