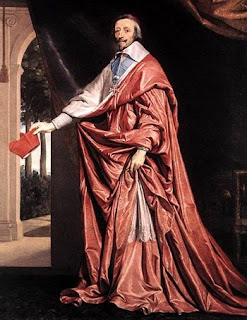 There are people like Armand Jean du Plessis Richelieu, Cardinal Duc du Richelieu-Cardinal Wolsey in England is another such-who were born to be politicians rather than churchmen; men, in other words, who are in the church through circumstances, rather than design.

Richelieu stands astride his age like a giant, a man who put the interests of the state before that of his class, and the interests of his nation before that of his church. He was not the model of Machiavelli's The Prince; he was the Prince. Inevitably such men make enemies rather more than they make friends, and even Louis XIII, who was so dependent on his great minister, is said to have expressed some relief when he died in December 1642.

It was not just the king who was pleased by his departure. According to Father Griffet, writing in 1768, the Cardinal "...was disliked by the people and I have known old men who could still remember the bonfires that were lit in the provinces when the news of his death was received." Cardinal de Retz claimed that Richelieu had created "within the most lawful of monarchies the most scandalous and most dangerous tyranny which may ever have enslaved the state." In his 1712 history on the reign of Louis XIII Michael Le Vasor wrote "I can look only with horror on a prelate who sacrifices the liberty of his fatherland and the peace of Europe to his ambition." This charge against the Cardinal-warmonger was later to make an appearance in Voltaire's Le Siècle de Louis XIV, where he says "...there was fighting since 1635 because Cardinal Richelieu wanted it in order to make himself necessary." For Montesquieu Cardinal Richelieu was, quite simply, a 'wicked citizen.'

Of course, none of this is fair or objective, and most of his later critics underestimate the extent to which Habsburg power, concentrated in Spain and the Empire, was a considerable danger to the security of France, especially after the onset of the Thirty Years War, which the Cardinal viewed in political rather than religious terms. But the image of the malevolent and scheming churchman made its way down the ages, emerging in the Romantic movement of the nineteenth century, in which the Cardinal is relentlessly vilified by poets and dramatists of all sorts.

In a sense he became, in post-Revolutionary France, the archetype of all that was wrong with the ancien regime. In Cinq-Mars, Alfred de Vigny's novel of 1826, Richelieu's attack on the nobility is blamed for all of France's subsequent ills. It was in this form that the Cardinal-mad, bad and dangerous to know-made his way across the English Channel, where Vigny's novel inspired Edward Bulwer-Lytton to write a play, called Richelieu or the Conspiracy.

Thus it was that the Cardinal, both sinister and witty, made his way on to the English theatre, one of the great stage villains of the age, depicted by Henry Irving, among others. Though barely aware of his existence before, English people discovered in the Red Eminence qualities that made him 'the man you love to hate.' And so it went on, back to France and The Three Musketeers, and back again to England in Stanley Weyman's popular novel of 1896, Under the Red Robe. From movie, to comedy, and even in children's cartoons, Richelieu lives. Better, I suppose, to be misunderstood and parodied than forgotten. :-)
Posted by Anastasia F-B at 16:20