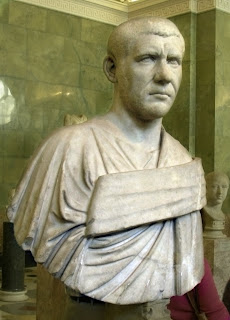 Most people, if they consider the matter at all, will think of Constantine the Great as the first Christian Roman Emperor, but there is a tradition that this distinction belongs to a third century emperor known as Philip the Arab. This is based on no greater evidence than a report in Eusebius of Caesarea’s Ecclesiastical History, which the author himself doubts, that Philip attended a Christian service at Easter, after being required by an unnamed bishop to confess his sins, though the date and the location are not mentioned. Beyond Eusebius there is nothing, and in his five year reign, about which not an awful lot is known, Philip continued to follow the state religion.

I was interested to note, though, in a glance over Marta Sordi’s The Christians in the Roman Empire that she makes the case for Philip, drawing on Eusebius and traditions after him. “I personally believe the story to be true”, Sordi concludes. What she, what any historian does or does not believe is monumentally irrelevant. All that matters is what can be proved.
Posted by Anastasia F-B at 16:40