The Myth of the Marshall 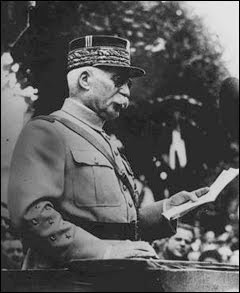 In retrospect this may be difficult to believe, but for most French people Philippe Petain came as a national saviour in 1940, much as he had at the Verdun in 1916. After the resignation of Paul Reynaud, Petain's appointment as Prime Minister was confirmed by a massive majority of 468 to 80 in the National Assembly, which also voted him autocratic powers, effectively bringing the seventy-year-old Third Republic to an end.

Support, moreover, came from all shades of French opinion; from the Socialists, on the left, to Action Francaise, on the right. For some time the exact political complexion of the new regime was in a state of flux; so Petain stood all the higher as the one constant, a representative of 'nation' rather than 'party.' The enemies of the new realities were to call supporters of Petain 'collaborators', 'fascists' and 'reactionaries'. Collectively, however, the only title they adopted themselves was 'Petainists' or 'Marechalistes.'

Petain attracted the kind of mass reverence formally accorded to kings. Busts and portraits of him replaced Marianne, the symbol of Revolution and Republic, across France. The crucial point here is that in the crisis of 1940 Petain was all things to all people; he was an image, it might be said, without substance. His national halo could only remain as long as he remained inactive, and for as long as he remained in silence.

Bit by bit the saintly image of the national saviour began to tarnish and decay, as the nature of the Vichy state became more apparent. It was not a regime of all France, but a regime of the right, confirmed when the leading representatives of the pre-war Popular Front government were put on trial in 1941. Furthermore, pro-German statements issued from Vichy also lost the government support, as did the forced deportations of French workers across the Rhine.

To some degree the burden of unpopularity was carried by Pierre Laval, Petain's Prime Minister, but the Marshal could not escape culpability altogether. The very best that could now be said of him was that he himself was a 'passive' victim. Jean Paillard, one of his most loyal supporters, wrote that after 1943 the Marshal was "a man of eight-five, almost alone and surrounded by young wolves with sharp teeth." In the end, a symbol first of resistance and then of salvation became little more than an embarrassing residue of an uncomfortable past. Even after his death he had supporters; but France had grown beyond the myth of the Marshall.
Posted by Anastasia F-B at 19:33