Have You Seen a Queen Travelling? 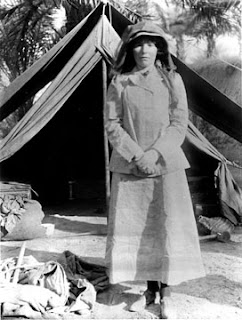 Gertrude Bell is a particular heroine of mine: the first woman down from Oxford with a First in Modern History; an independent scholar, an archaeologist, and expert in several Middle Eastern languages, a writer, a political specialist, a traveller; a friend of sheiks and kings-the female Lawrence of Arabia! In 1900 she dressed herself as a Bedouin man, riding alone into the dangerous Hauran Plain, still under the control of the Ottomans, in search of the Druze, a militant Muslim sect, which had been fighting the Turks for two hundred years. She made contact with Yahya Beg, king of the Druze, and conversed with him in his own language. Some weeks after he was to ask another visitor to his domain 'Have you seen a queen travelling?'

Bell's knowledge of the Arab peoples was later to be used by the British authorities after the outbeak of the First World War. When the British Army captured Baghdad in March 1917, she took up a position in the city as Oriental Secretary. There she remained in Iraq, or Mesopotamia, as it was known at the time, until after the conclusion of the war. Like her friend, Lawrence of Arabia, she became keen advocate of an independent Arab state. In 1919 she complied a report on the subject, in which she wrote;

An Arab State in Mesopotamia...within a short period of years is a possibility, and...the recognition or creation of a logical scheme on those lines, in supercession of those on which we are now working on Mesopotamia, would be practical and popular.

Her advice was effectively ignored, and the tribes of the Euphrates, angered that one form of imperialism gave every appearance of being replaced by another, rose in revolt, an event that cost the lives of 10,000 Arabs and several hundred Britons. Bell wrote:

We have made an immense failure here. The system must have been far more at fault than anyone suspected...I suppose we have underestimated the fact that this country is really an incohate mass of tribes which can't as yet be reduced to any system. The Turks didn't govern and we have tried to govern...and failed.

For Bell the one way out was to give the people a distinct political identity, which she believed could be focused in a monarchy, in the particular person of Faisal bin Hussein, recently deposed by the French as King of Syria. At the Cairo Conference of 1921, she and T. E. Lawrence worked assiduously for the creation of Iraq and Transjordan, and Bell persuaded Winston Churchill, as Colonial Secretary, to endorse Fisal as King of Iraq. Bell was also in favour of Sunni dominance in the new nation: "Otherwise", as she put it, "you will have a... theocratic state, which is the very devil."

With her help and guidance Fisal came to his new kingdom, and was crowned king in August 1921. For Arab and Briton alike Bell was the uncrowned 'Queen of the Sands.' With the King's approval she went on to found Iraq's great Archaeological Museum, whose unparalleled collection was so sadly looted in 2003. This leads me on to some final words from 'Queen Gertrude', which may serve to sum up the present position of the Western powers in the region;

If Mesopotamia goes, Persia [Iran] goes inevitably...And the place which we leave empty will be occupied by seven devils a good deal worse than any which existed before we came.

I've always believed that an understanding of history should be an essential basis for the formation of policy. But historians will always be cast in the role of Cassandra. Even so, Gertrude Bell's book, The Desert and the Snow, is still worth reading, all these years later.
Posted by Anastasia F-B at 16:51