The Romans in Britain 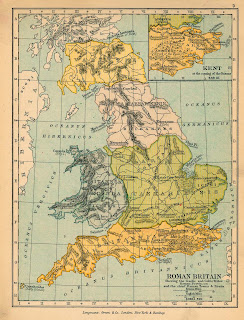 I rather suspect that Roman attitudes towards Britain were rather like British attitudes towards the north-west frontier of their own nineteenth century Indian Empire: important to hold but difficult to love. Dio Cassius, when writing of the third century campaign of Septimius Severus in the north of the island, was to lament the difficulties caused by the 'bogs and forests', the very same things that had hindered the conquest under Claudius almost two hundred years before. Ammianus Marcellinus, a fourth century Roman historian, was to praise the Emperor Constans for a surprise visit he made to the island in 343AD, in terms that would suggest he had crossed to the ends of the earth!

But Britain remained attractive, in economic and strategic terms, for the rest of the Roman world; at once a place of profit and settlement in the south, and mystery and barbarism in the north, the direction of Ultima Thule and the Fortunate Islands. Even Antoninus Pius, the most unwarlike of Emperors, was determined to make his mark there, advancing his army into what was later to become the south of Scotland, the only expansion of his reign. And it was from Britain that Constantine the Great began what was perhaps the last great military campaign of the Roman world, one that was to transform the Empire. "Fortunate Britain, now most blessed of lands since you have been the first to see Constantine as Caesar."
Posted by Anastasia F-B at 17:20