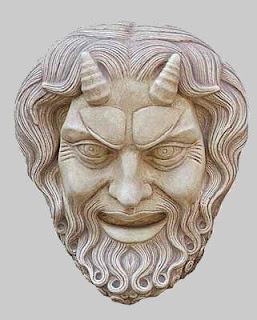 I described Satanism as a Christian heresy in a discussion on one of the social networks I belong to. I still hold to that essential truth but I would modify it somewhat in the light of what I have since discovered from some rapid reading.

I suppose it is possible to identify Satan as a kind of symbolic figure, the tragic rebel-hero of Milton ’s Paradise Lost, who would rather rule in Hell than serve in Heaven. I’m still unable to make a definite conclusion on this-I have simply not read deeply enough-but Anton LaVey, the author of The Satanic Bible, seemed to be promoting a cult that was primarily hedonistic rather than malign. I suppose it is ‘paganism’ insofar as it is a deliberate reaction against the strictures and restrictions of Christianity.

I actually find the La Vey branch of Satanism quite appealing, insofar as it harmonises with my own personal outlook on life and insofar as it stands against the wooly-mindedness of so much of contemporary Neo-Paganism. But why focus on this particular figure or avatar; why have Satan and all of the Abrahamic baggage as a guide and a symbol? I simply makes no sense to me when there are plenty of alternatives available who might equally serve and with far less ambiguity, uncolored, above all, by the judgments and preconceptions of others. Perhaps it's simply the shock value? Anyway, Pan, for me, is the ultimate symbol of the purest forms of hedonism and freedom. Far rather him, freed of all corruption, than Satan, Lucifer, the Devil or whatever.
Posted by Anastasia F-B at 16:51