Such, Such Were the Joys 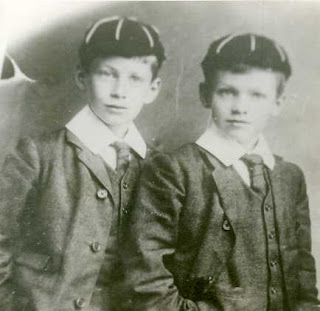 Anyone reading Orwell's early work will be aware of his hostility to all things Scottish, which takes various forms, most particularly his deliberate use of the word 'Scotch' instead of 'Scots', because he was fully aware of how much annoyance this caused. I used to believe that this dislike dated from his time in the Burmese Police, where he encountered a particular kind of Scotsman, once common in the Imperial service. It was only after reading Such, Such Were the Joys, his essay on St. Cyprian's, his prep school, that I became aware of the true cause.

Cicely Ellen Philadelphia Vaughan Wilkes nee Comyn, the co owner of the school, better known to Orwell, or Eric Blair, I should say, as Flip deliberately encouraged a 'cult of Scottishness', in part derived from her pride in an assumed Scottish ancestry.

The Comyns were one of the great nobel houses of Medieval Scotland, and one-time rivals to King Robert Bruce. But more than that the cult, brought out all of Flip's latent snobbery, and left poor Eric with a deep sense of resentment:

The School was pervaded by a curious cult of Scotland, which brought out a fundamental contradiction in our standard of values. Flip claimed Scottish ancestry, and she favoured the Scottish boys , encouraging them to wear kilts in their ancestral tartan instead of school uniform, and even christened her youngest child by a Gaelic name...But underlying this was something quite different. The real reason for the cult of Scotland was that only very rich people could spend their summers there...Flip's face always beamed with innocent snobbishness when she spoke of Scotland. Occasionally she even attempted to trace a Scottish accent. Scotland was a private paradise which few initiates could talk about and make outsiders feel small.

If anyone is puzzled by this (Scots most of all!) I should make it clear that this 'Scotland' is not to be found in the backstreets of Glasgow, Edinburgh or Dundee, but on the grouse moors and by the salmon rivers, where the only Scots to be seen were beaters, game-keepers and ghillies! Such, indeed, were the joys

When I was sent away from home for the very first time I must confess I was a little bit tearful and fearful, but before this I used to soak up stories about girls' boarding schools and quickly learned to make the most of the opportunities offered by Wycombe Abbey, my old school, which I came to adore. But Eric, promising as he was as a scholar, was socially and personally slighted, embarrassed by his rather down-at-heel middle class origins. Because of the perceived insults he received at the hands of the Wilkes a 'Bolshie' attitude began to form, fully developed by the time he went to Eton, an attitude seems to me operating like a form of emotional armour, more than anything else.

I can only speculate here, but the English class system was much more rigid in his day, and I think he always felt himself to be an outsider; an outsider from his own middle-class milieu and an outsider from the working-class he adopted but never really seemed to like. The protagonists in his novels are always the same lower middle-class types, which is really no surprise. What is revealing is the way that some become such self-pitying egocentrics. Just think of the tiresome Gordon Comstock in Keep the Aspidistra Flying, who digs his own social grave then blames everybody else when he lies in it! Please do not think I am hostile to Orwell; I'm not-I love his work, though some parts more than others, and the essays more than most of the fiction
Posted by Anastasia F-B at 17:13