Some Thoughts on Operation Barbarossa 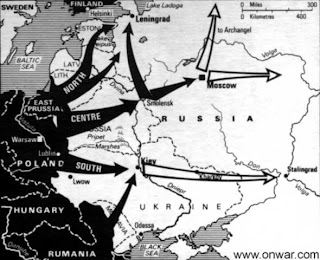 I wrote the following as a response to a question on how close Operation Barbarossa, the German invasion of Russia, came to success. It seems appropriate to save it here now we are close to the seventieth anniversary of the outbreak of the Second World War.

How close did the German invasion of Russia come to success? Far, far closer than many people care to allow. The suggestion that the whole thing was a piece of political and strategic madness by Hitler, pushed most assiduously after the war by Franz Halder, the Wehrmacht Chief of Staff, among others, does not stand up to examination. His own wartime diaries reveal that he was as keen on the whole operation as anyone. As early as 3 July he wrote, "It is thus probably no overstatement to say that the Russian campaign has been won in a space of two weeks".

We now known, from documents released by the Russian archives since the collapse of the Soviet Union, that this was a view that even Stalin was close to accepting. At the end of that month one of the agents of Lavrenti Beria, head of the NKVD, made attempts through the Bulgarian ambassador to discover if Hitler would accept large territorial concessions in return for peace. The Russian historian, Dimitri Volkogonov, has also uncovered evidence to suggest that the Soviet Foreign Minister, Vyacheslav Molotov, was actively preparing for a second Treaty of Brest-Litovsk, which had ended Russian involvement in the First World War. The thinking seems to have been that of Lenin in 1918: trade territory for political survival.

The real crisis came in October after the great enveloping battle at Vyazma and Briansk, the opening move of the final advance on Moscow, where the Germans took 660,000 prisoners, leaving a mere 90,000 men to face the whole of Army Group Centre. It is even rumoured that some Moscovites put out welcome posters for the Germans. Zhukov later reported that Stalin was more desperate than ever for peace. He was also on the point of leaving Moscow. Document No. 34 of the State Defence Committee, dated 15 October 1941, and now in the public domain, shows just how serious Stalin believed matters had become. It is resolved, the document proceeds,

To evacuate the Presidium of the Supreme Soviet and the top levels of Government...(Comrade Stalin will leave tomorrow or later, depending on the situation)...In the event of enemy forces arriving in Moscow, the NKVD are ordered to blow up business premises, warehouses and institutions which cannot be evacuated, and all underground railway electrical equipment.

The following night an armoured train made ready to carry Stalin east.

Nevertheles, it is by no means certain that the Soviet Union would have fallen even if Moscow had been taken; but it would have given the Germans crucial control over the whole Russian transport network. More than that, the collapse of Russia's ancient capital, and the flight of Stalin, is likely to have had the most devastating effect on both morale and fighting ability. If Stalin was a coward, it has rightly been written, then everyone could be a coward.

There are two things surely that saved Russia at this most crucial point in its history; the decision of Stalin, for reasons yet unkown, to remain in Moscow, and crucial intelligence forwarded from Tokyo by Richard Sorge, a Communist secret agent, that the Japanese were not going to attack Russia, not at least until after Moscow had fallen. In a huge gamble the guard on Manchuria, occupied by the powerful Kwantung Army, was dropped, and the Siberian divisions moved west. If Sorge had been wrong it is difficult to know how the Soviet Union could have survived. But he was not wrong. Zhukov deployed his fresh units to the north and south of Moscow. For once it really is appropriate to say that the rest is history
Posted by Anastasia F-B at 18:14