The Horror of the Hustings 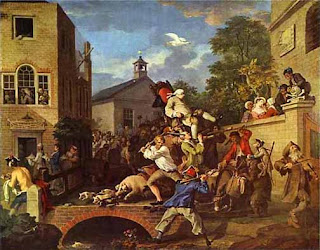 Those who have read George Elliot’s novel Middlemarch will remember, I feel sure, Arthur Brooke of Tipton’s humiliation on the hustings, having announced his candidature for Parliament. Indeed, it’s hardly possible to forget the scene depicted by the author, in all of its comic intensity!

The novel is set in the 1830s before the passage of the Great Reform Act, a time when only a tiny proportion of the adult male population-and none of the female-had the right to vote at all. But the kind of open air public meeting addressed by Brooke was an example, if you like, of popular democracy in action, almost in the style of ancient Athens. Even if most of those who came had no say in the outcome; they could at least make their views know, as they often did in the most vigorous way possible. For candidates it could be a really bruising experience, often physically as well as mentally.

The story of this aspect of English political history, the rise and fall of popular confrontation, is well summarised in John Lawrence’s new book, Electing Our Masters: The Hustings in British political Culture from Hogarth to Blair.

For all of the eighteenth century and a good bit of the nineteenth century Parliament was largely dominated by a narrow landed elite, resistant to all forms of popular pressure. But even candidates hand-picked for rotten boroughs, those in the gift of the local landlord, still had to go through meetings and even public nominations hustings, not abolished until 1872.

It was on these occasions that the public had a chance to make themselves heard, shouting abuse as well as throwing rotten vegetables, eggs and what was euphemistically referred to as ‘street dirt’! It was a two-way process: the crowd had a chance to let off hell and the candidate had a chance to prove that he could go through hell with equanimity. Poor old Brooke could not! It’s possible to get a sense of what went on, as Lawrence says, from the Hogarth’s wonderful prints. Writing in the 1930s Churchill put it thus;

Dignity may suffer, the superfine gloss is soon worn away…much has to be accepted with a shrug, a sigh or a smile; but at any rate in the end one knows a good deal about what happens and why.

Churchill, in a sense, represents a late flourishing of a form of popular democratic interaction that played such an important part in political tradition, played such an important part in making him the man he was-a grandee, yes, but one who understood even the most ordinary of people, one who had the ability to manage crowds achieved by few others. I say late flourishing because the hustings as a form of political contact declined steadily in the course of the last century with the rise of other media. John Major’s 1992 ‘soap box’ election was a late, personal and temporary revival.

Now politics and elections are much more managed. Television is the preferred mode of communication rather than face-to-face encounters. The expenses scandal saw a slight move away from this trend, though those MPs called to account in their constituencies faced not general meetings but in camera assemblies of their own parties, though this was bruising enough for some!

Politicians, particularly senior ones, are largely cushioned from potentially dangerous contacts with voters. Yes, the eggs and the rotten tomatoes have gone, though so too has much of the vibrancy. I imagine the very idea of returning to the hustings would terrify so many of the mediocrities who occupy Parliament now: not that many Churchills; lots of Brooks!
Posted by Anastasia F-B at 04:53