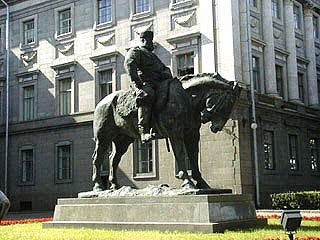 If one wants to understand Tsar Alexander III, to understand the nature of the man, and the regime he created, I would suggest if in St. Petersburg one should visit the Marble Palace, where one will find a huge bronze equestrian statue. Grotesque in proportion and appearance, it was meant to create an impression of awesome autocratic power. But no sooner had it appeared than people started to call it 'The Hippopotamus', a name it has carried ever since. When the sculptor himself heard of the popular reaction to his work, after it rode into the world in 1909, he said "I don't get into politics. I just depicted one animal on another." :-))

You see, the Hippopotamus is a perfect symbol for the Russia of Alexander III, in all of its colossal immobility. In his determination to preserve the autocratic character of the state, Alexander moved firmly away from the path of reform, previously pursued by his own father. Although the Russian economy-and Russian capitalism-developed rapidly during the period of his rule, the state became ever more repressive and reactionary. Amongst other things the powers of the Okhrana, the Tsarist secret police, were considerably increased. The 1881 Statute of State Security, which Lenin later described as the 'real Russian Constitution', extended extraordinary authority to the Ministry of Internal Affairs, allowing it to prohibit gatherings of more than twelve people, close schools and universities, and prosecute any individual for perceived political crimes.

Besides reinforcing the apparatus of repression, Alexander also decided that the path to national salvation lay in further measures of Russification, carried on at the expense of the Poles and other minorities within the Empire. The Orthodox Church was promoted above all others, and Russia's large Jewish minority, confined within a designated Pale of Settlement, was subject to increasing levels of persecution and discrimination.

But it was in the countryside that Alexander's reactionary policy was at its most damaging for the long-term prospects of the Romanovs. Peasant self-government was undermined by giving increased powers to the zemstva, dominated by the nobles. Still worse, Alexander II's rural reforms were effectively rendered meaningless by the appointment of the so-called Land-Captains, officials answerable to the provincial Governor-Generals. These Land-Captains had the power to overrule peasant courts and remove peasant officials. They could also arrest any of the peasants under their authority, fine them or even subject them to corporal punishment. For the peasants the system was so oppressive that many were convinced that serfdom was being restored, especially after 1893, when they were banned from leaving their local mir, the communes within which they lived.

Alexander had the character, the stature and the will to force his model of autocracy on Russia. It was an example he bequeathed to his son, Nicholas, always in awe of his formidable father. He filled the mind of unimaginative Nicky with all sorts of outdated notions and values. The last of the Tsars was a man filled with good intentions; and with these he took the road to hell
Posted by Anastasia F-B at 17:17