Elizabeth and the Catholics 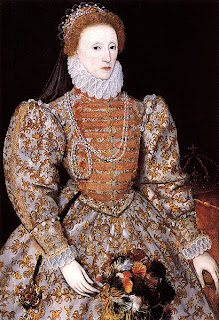 Official attitudes to Catholics in Elizabethan England were, to begin with, fairly fluid, with patterns of conformity and dissent dictated as much by local considerations as by national policy. It was quite possible for people to be Catholic in some aspects of their lives, though not in others; conformist and non-conformist at one and the same time.

This flexibility gave way to more rigid attitudes in 1571, by which time the Church of England had given firm expression to its Protestant doctrine in the Thirty-Nine Articles, while the Council of Trent gave a far stricter definition of what it meant to be a Catholic, forbidding any kind of participation in heretical services.

At that point the whole question moves from one of faith to one of politics: the conflict and contradiction between loyalty to one's faith and loyalty to one's nation. Even so, it is important not to place too much weight on Pius V's Regnans in Excelsis, declaring Elizabeth to be a pretender, as most English Catholics made open and sincere declarations of loyalty to the crown.

Still, for obvious reasons, it made the general position of recusants that much more problematic. The government became more vigilant, though action against priests was restricted to the new cohort emerging from Douai College, and not the surviving native or Marian priests, who were allowed to continue with minimum interference. In 1585 all priests ordained abroad and returning to England were declared guilty of high treason, and those who helped them of a felony. At the same time the pressure of the recusants became more systematic.

It was possible for ordinary people to remain Catholic-and a great many did-though the financial penalties for doing so became ever more burdensome. By the end of Elizabeth's reign in 1603, while it is difficult to give precise figures, Catholics comprised no more than about 2% of the total population in England, more numerous in some places than in others. The most secure were the upper class and noble Catholics, those who could afford to pay the recusancy fines. But the faith survived also among sections of the working population. They survived, with difficulty, yes, but without the wholesale persecution that was the fate of religious minorities on the Continent.
Posted by Anastasia F-B at 18:21