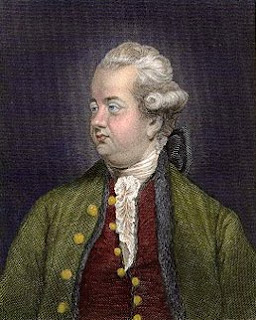 Edward Gibbon was first and foremost a historian, one that engages too closely with his subject, perhaps, for contemporary taste, but a remarkable one nontheless. He could be highly critical of the impact of forms of religious belief on civil society, and the contribution they made to the corruption of the perfect ideal of the Roman state, so much so that The Decline and Fall of the Roman Empire was placed on the list of banned books by the Catholic Church.

He says many things about the Prophet Muhammad, which I dare say that Muslim scholars would object to; but it is not all accusation, and he looks at Muhammed's life from the point of view of a historian, not a Christian polemicist. I have a copy of the Decline and Fall in front of me, in the 1978 reprint of the six volume Everyman edition, first published in 1910. Gibbon's remarks are too lengthy to quote in full, but here is some of his summation of Muhammad's life from volume five, pages 273-4:

The author of a mighty revolution appears to have been endowed with a pious and contemplative disposition: so soon as marriage had raised him above the pressure of want, he avoided the paths of ambition and avarice; and till the age of forty he lived in innocence, and would have died withut a name. The unity of God was an idea most congenial to nature and reason; and a slight conversation with the Jews and the Christians would teach him to despise and detest the idolatry of Mecca. It was the duty of a man and a citizen to impart the doctrine of salvation, and to rescue his country from the dominion of sin and error. The energy of a mind incessantly bent on the same object would convert a general obligation into a particular call; the warm suggestions of the understanding or the fancy would be felt as he inspiration of Heaven; the labour of the thought would expire in rapture and vision; and the inward sensation, the invisible monitor, would be described with the forms and the attributes of an angel of God...Charity may believe that the original motives of Mohammed were those of pure and genuine benevolence; but the human misssionary is incapable of cherising the obstinate unbelievers who reject his claims, despise his arguments, and persecute his life; he might forgive his personal adversaries, he may lawfully hate the enemies of God; the stern passions of pride and revenge were kindled in the bosom of Muhammed, and he sighed, like the prophet of Nineveh, for the destruction of the rebels whom he had condemned.

This is fairly typical of Gibbon, and there are indeed more critical passages; but there is nothing that bears any similarity to 'Show me just what Muhammad brought that was new, and there you will find things only evil and inhuman...' There may be much in Gibbon with which Muslims would take issue; but he makes a sincere attempt to be honest in his judgements and scrupulous in his facts.
Posted by Anastasia F-B at 16:44