The Possessed-On the Psychology of Terror 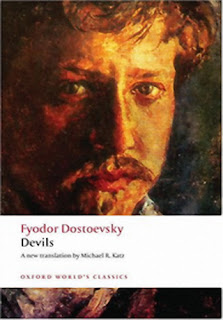 I found Michael Burleigh's Blood and Rage: A Cultural History of Terrorism to be altogether fascinating insight into the ‘psychology of terrorism’, a non-fiction account that might very well be set alongside Joseph Conrad’s The Secret Agent and Fyodor Dostoevsky’s The Possessed for the insight they all give into a certain mode of thought.

It's worth stressing that people are often motivated not by grand principles, but by forces altogether baser, more visceral and more personal; excitement, the thrill of danger, social envy and simple resentment all coming before the grand abstractions of politics or religion. Take the case of Emile Henry, a French anarchist, who threw a bomb into the Gare Saint-Lazare Restaurant in 1894, killing one of the diners and seriously injuring twenty more. His motive was to show that the bourgeoisie that their "pleasures would not be untouched", though almost all his victims were workmen.

There is also Vera Figner, the Russian Narodnik, who became a terrorist in part to escape the restrictions placed upon her as a woman. Or there is the example of the young men in the contemporary Muslim world, trapped by chronic unemployment, for whom radical Islam offers a way out…as well as new jeans and cool trainers.

In the 1970s the actions of the German Red Army Faction might be said to have emerged from the 'boredom of privilege' than any meaningful political grievance. In Italy one former member of the Red Brigades, an organisation which killed hundreds in the 1980s, revealed his own motives-"Arms have a fascination of their own. It is a fascination that makes you feel in some way more virile...this sensation of feeling stronger, more manly...I found myself...showing them to women to try to impress them."

So, there you have it. And as Burleigh points out the one thing that unites the German and Italian left-wingers with present-day jihadists is not the thought of Marx or Muhammad, but a fascination with gangster films and splatter movies. Did you know, for instance, that in the Al Qaeda training camps in Afghanistan one favoured form of relaxation was to watch Arnold Schwarzenegger movies? Well, now you do!
Posted by Anastasia F-B at 17:54