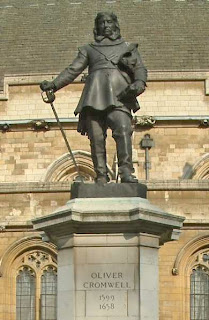 Every age has a tendency to refashion the past in its own image, and the story of Cromwell's statue at Westminster provides no better illustration of this general principle. In fact, this statue, if 'read' in its own particular historical context, tells us far more about the shifts and changes in Victorian opinion than it does about the infamous Lord Protector.

The saga begins soon after the old Palace of Westminster burned down in 1834. To enhance the new gothic structure designed by Sir Charles Barry and Augustus Welby Pugin, the recently established Fine Arts Commission, arranged for a series of paintings, statues and stained glass, all intended to celebrate the nation's history. This, of course, included depictions of the various monarchs. Only Oliver Cromwell was omitted, passed over in silence as a regicide and a tyrant, a view that had been in place ever since the Restoration of the monarchy in 1660.

But the decision of the hapless Commmissioners was greeted by protests from across the country. Radicals and Nonconformists of all sorts demanded that he should have his rightful place in the national panorama. The reason for this is not too hard to detect. England was undergoing some rapid social and political changes; the old aristocratic dominance, the dominance of the Cavaliers, if you like, was under challenge by the 'Roundheads' on a whole variety of fronts. The Reform Act of 1832 had extended the basis of the franchise to large sections of the new middle-classes.

The landed interest was under sustained challenge from the Anti-Corn Law League. Right at the heart of this desire for change were to be found the religious Nonconformists, once confined to the political margins, now moving steadily towards the centre. For all of these people Cromwell was a symbol. On this occasion the agitation failed; but it would not go away. Admiration for Cromwell grew still further when Thomas Carlyle, the historian, published Cromwell's Letters and Speeches in 1845. No longer perceived as the tyrant who dismissed more Parliaments than any other man in history, Cromwell re-emerged as an earnest middle-class Victorian moralist, an advocate of the twin ideals of empire and religious toleration.

In the years that followed he appeared in provincial town halls and Nonconformist chapels up and down England, in statue, bust or in stained glass, wherever the radical tradition was strongest. Another attempt to install him at Westminster was made in 1871, supported by over 100 MPs, but once again was defeated as Whigs and Tories fought out the old battles of the English Civil War.

Thereafter the issue died away somewhat, especially after William Ewart Gladstone took over the leadership of the Liberal Party. For the Nonconformists and the radicals the 'Grand Old Man' became something of a living embodiment of Cromwell, full of the same moral earnestness and sense of purpose. What need of statues when one had the real thing?

The project revived for the oddest of reasons: in 1894 the 'Roundhead' Gladstone was suceeded both as leader of the Liberal Party and as Prime Minister, by the 'Cavalier' Lord Rosebery. Rich, elegant, urbane, Rosebery, a member of the Jockey Club, is said to have had two ambitions: to become Prime Minister and to win the Derby. What he needed to do immediately was to uphold the uncertain coalition of interests that made up the Liberal Party, which almost came apart in the latter stages of Gladstone's ministry over the question of Irish Home Rule. To secure his position he needed the support of the Nonconformists; and to secure the Nonconformists he proposed to give them Cromwell. But he was surprised from an unexpected direction, as yet another old battle was refought, the bitterest of them all.

Rosebery mangaged to push the issue of the statue through Cabinet; but when the Commons was asked to fund the project in June 1895 John Redmond, the leader of the block of Irish Nationalist MPs, on whose votes the ministry also depended, rose in protest, reminding the House of the horrors of the Cromwellian conquest of Ireland. The motion had to be withdrawn, a move which was greeted, as one Cabinet member noted, "with anger and disgust from English Liberals, with thick-witted jibes from Unionists...and with wild cries of aboriginal joy from our Irish friends."

In the end Rosebery decided to pay for it out of his own pocket, but the erection was resisted all along the way, by an odd combination of Tory and Irish opinion. it was only finally unveiled on 14 November 1899 at 7.30 in the morning, an unusually early hour, intended to avoid any adverse demonstration. Cromwell had won his last battle.
Posted by Anastasia F-B at 00:52