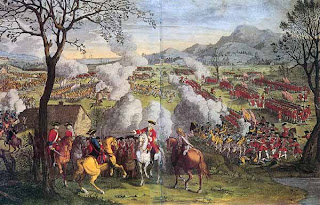 My boyfriend and I are actually in Edinburgh at the moment-we have been since Saturday-for the International Festival. It’s an exciting place to be at this time of year, with so much to do and to see, lots and lots of shows, too much, really, to take in properly. Edinburgh itself is a lovely city, in my opinion one of the three most beautiful in Britain, along with York and Bath. It’s a bit grimy at the moment (I think there is a local bin strike or a go slow) and-my God-the seagulls, what a racket they make! From our hotel in the centre we can hear them kaa, kaa kaaing right through the night: they never seem to sleep!

What I really wanted to talk about was a piece I caught in the Saturday edition of The Daily Telegraph about the Battle of Culloden. I’m not sure if this appeared nationally or in the Scottish edition only. Anyway, it was a report on plans to offer a better commemoration of those who died on the government side, often described wrongly as either ‘Hanoverians’ or English. Indeed, at the moment all there is to compare with the many clan memorials a rather sad stone on the so-called ‘field of the English.’ So, it’s time to explode a few more myths and recall the brave men, Scots as well as English, who fought and died on that day in April 1746 for King and Country.

Culloden, fought on 16 April 1746 on Drumossie Moor close to Inverness, is usually celebrated as the last major land battle to take place on British soil. In essence it was a struggle for the throne, between those who supported George II and the Hanoverian succession and those who supported the Jacobite pretenders, the descendants of James II, whose grandson, Charles, commanded the rebel troops that day. It was a straightforward dynastic war, though complicated by the fact that the Jacobites had rather cynically attached a Scottish nationalist gloss to their campaign. It is through this glass darkly that a great many Scots still perceive Culloden, as a struggle between themselves and the wicked English, who did the most awful things during and after the battle.

Sorry, I really do not wish to be facetious: the government troops did behave abominably, bayoneting many of the wounded as they lay on the field. But the point is these government troops contained a large number of Lowland Scots, as many as three full regiments, as well as a significant body of anti-Jacobite Highland militia. And if anyone hated the Jacobite Highlanders it was these men, not the English. Some of the worst post-battle atrocities were committed by Scots, in times and in places were they could not be excused by heightened passions. You see, for centuries past, even before the Union of the Crowns, the English-speaking Lowlands had demonstrated an intense dislike of the Gaelic-speaking Highlands. Governments in Edinburgh had even considered what would now be described as forms of genocide or ethnic cleansing.

The other thing some Scots tend to overlook in a view of the past that is both romantic and maudlin is that the crimes committed after the battle were fairly typical of the times. The Highlanders were massacred not because they were Sots but because they were rebels. It’s all very well to damn the memory of Butcher Cumberland but, for the sake of balance, have a look at what the Stuarts did to the English rebels of the West Country after the Battle of Sedgemoor in 1685. It’s time for a more realistic view of the past; time for Scotland to dispense with the myths.

So, that’s it, just some thoughts from 'abroad'. I really hope I haven’t made some fresh Scottish enemies because I really do love the country, its past and its exciting present. And Edinburgh would be so much nicer to live in than London if only it wasn’t for those blasted seagulls!
Posted by Anastasia F-B at 18:26