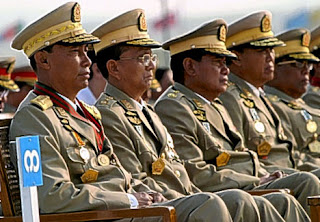 Will the military dictatorship in Burma, Myamnar, if you prefer, survive? An interesting question, I think. I would have to say that Burma shows the very same structural factors that have served to weaken democracy in Pakistan, on the other side of the Indian Subcontinent: it has a strong military tradition, a fairly weak civil society, and a fear of national disintegration. The situation in Burma is further complicated by a fear of outside intervention.

Remember, too, that Burma did not gain its independence by the same political process at work in India and Pakistan. Rather, it emerged as a result of the war against Japanese occupation, involving local Burmese as well as Allied forces. This mean that the significant leaders who emerged in 1945 all had a military, rather than a civilian background. It's one of history's ironies that the greatest of these leaders, Aung San, the father of Aung San Suu Kyi, the voice of the democratic opposition, is also the iconic figure who has helped sustain the special place of the military in Burmese politics

This has also been supported, as I have said, by the relative weakness of civil society. During the days of British rule the native Burmese played very little part in managing day to day affairs, with administrators being recruited from among colonial Britons or Indians. Excluded from the civil service, the ethnic Burmese nevertheless formed an important part of the police and the army. Although an embryonic native middle-class was beginning to emerge in the course of the early twentieth century, it was almost completely wiped out in the Great Depression of the 1930s.

Fear of national disintegration has roots in the early evolution of the Burmese state. In the two hundred years prior to the advent of the British in the 1820s, the Burmese kings had expanded their control out of the lowlands into areas inhabited by different ethnic and linguistic groups. The Shan, the Karen, the Arakanese, the Mon, the Chin, the Karenni and the Kachin, all non-Burmese speaking, now make up approximately one third of the total population, occupying two-thirds of the national territory. Fears that these centrifugal forces will destroy the integrity of the nation have been fueled by the long-standing insurgencies of the Shan and the Karen. The opportunity this might provide for foreign intervention has strengthened the army's sense of paranoia, creating a siege mentality and a persistent mood of xenophobia amongst the generals. As far as the military is concerned it is they who are the guardians of the nation, the one guarantee that Burma will survive as a unitary state
Posted by Anastasia F-B at 00:47