The Greatest Failure since Lenin 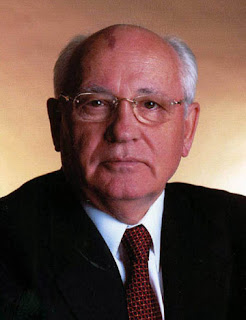 It’s now twenty years since the fall of the Berlin Wail, presaging collapse of Communism across Eastern Europe. I marked the occasion recently in a piece I called The Woes of Lemonade Joe, focusing specifically on the actions of Mikhail Gorbachev. I’m now beginning to find out even more about the man, about exactly what motivated him. And the thing that motivated him most was the writings of Lenin! I can’t quite believe that; he must have been the only man in the whole rotten system to pay anything bit lip service to that particular monster of Russian history. I’ll say more on this in a bit.

I’ve glanced over The Accidental Hero of 1989, a piece by Victor Sebestyen in the latest edition of Prospect. Some of the details are really quite amusing. The gradual sclerosis of the Soviet leadership in the days before Gorbachev became General Secretary was a source of much sardonic humour. How could it not when a living cadaver like Konstantin Chernenko was wheeled on to the stage? “Comrades,” one joke went, “we will start the congress in the traditional way-with the carrying in of the general secretary.”

Gorbachev, reaching the top of the barbed-wire pole in his fifties, came almost like a schoolboy compared with the gerontocracy that had ruled hitherto. Amazingly he was the first Soviet leader to have been born after the Revolution of 1917. His rise through the ranks of Party and government followed the usual pattern. “We all licked Brezhnev’s ass”, to use his own words. But Lemonade Joe was different: he was an idealist in a world of cynics and placemen-and that was the cause of his ruin and the ruin of the Evil Empire. It must be one of history’s acutest ironies: for what Lenin set up he also pulled down.

It was Gorbachev’s special mission, as he saw it, to return to the ‘pure’ path of Lenin away from the ‘perversions’ of Stalin. Leninist ideology was always there as a sort of background noise, some noticed but mostly tried to ignore, though not Gorby. His idealism is actually quite touching, naïve, yes, but touching. Unfortunately for him it most often ended in disaster. He somehow thought that by allowing the publication of Pasternak and Solzhenitsyn, by revealing the horrors of Soviet history, that people would somehow become better Communists! The reality, of course, is that they began to hate the foul doctrine even more.

It really is true: Gorbachev’s path to hell was paved with not just good intentions but with truly noble ones. Consider more closely the actions, worthy in every degree, which earned him the nickname of Lemonade Joe. In 1984 more than nine million drunks were picked off Soviet streets. The statistics for premature death, family violence and crime were truly shocking. In the Politburo when Gorbachev proposed a drastic increase in the price of vodka, Vladimir Dementsev, the finance minister, objected that it would have disastrous effect on state finances. “Do you propose to build communism on vodka?”, Gorbachev responded. He simply did not understand that the system had long since abandoned all attempts to ‘build communism.’

The price hike had just the effect Dementsev predicted. What was worse the growth in illegal distilleries and home brewing resulted often in a form of mass poisoning. The death rate shot up even further. Gorbachev took two steps forward and three steps back. And that is more or less how the Soviet Empire was governed in its final years.

He receives hardly any mention now in Russian school texts, which devote much space to the greatness of Stalin. That’s not fair. Gorbachev was by far the greatest Leninist since Lenin; and that is precisely why he was Communism’s greatest failure.
Posted by Anastasia F-B at 17:00