The Lessons of October 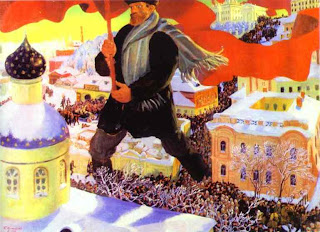 The history of the period between the World Wars of the last century is, it might be said, the history of reaction to the Bolshevik Revolution; that the victory of the Communists-which Lenin and Trotsky believed would be the spark for revolution across the Continent-was only the first stage in a new civil war, a new class war, if you prefer, in which the left saw defeat, after defeat, after defeat.

Not only did the Bolshevik victory cause a permanent division between the Communists and the moderate Socialists, but it was one of the most important factors in the shaping of Fascism and right-wing authoritarianism, first in Italy and then across the rest of Europe. Fear of Communism, in other words, was the greatest single force in galvanizing the right, from Horthy to Hitler.

So, you already have an international labour movement further divided and further weakened by the emergence of vigorous forms of right-wing reaction. To make matters even worse, a large section of the left looked to the Third International in Moscow for political direction, which most often results in a 'general line', regardless of local conditions. Looking beyond Europe, the United Front strategy of the 1920s obliged those loyal to Moscow to enter into alliances with so-called bourgeoisie liberation movements, which almost led to the ruin of the Chinese Communist Party in 1927, when it was purged by Chang Kai-shek.

Having learned nothing from this, the Comintern then adopted the ultra-left Third Period line, favoured by Stalin, which insisted that revolution was immanent, and that the real enemy was not the Fascist right but the moderate left, the so-called 'Social Fascists'. It was against this background that Hitler came to power in 1933, bringing the destruction of the KPD, the largest Communist party in Europe outside Russia.

Now, with the whole of the European left in disarray, and Stalin in a state of shock, the Comintern made yet another rapid change, this time in favour of Popular Fronts, intended to unite all on the left, Communists and Socialists, with moderate liberals, in a common effort against the further advance of Fascism. But the Popular Front in France only added to that country's deepening political divisions, while the Popular Front in Spain led to the outbreak of the Civil War and the victory of Francisco Franco, yet another serious defeat of the left.

So, what is the conclusion? Simply this: that the Bolshevik Revolution created the raison d'etre for Fascism and, by dividing the left, weakened the capacity of the working classes to resist its advance. It was a disaster in whichever way you care to look at it, in Russia and beyond
Posted by Anastasia F-B at 16:59