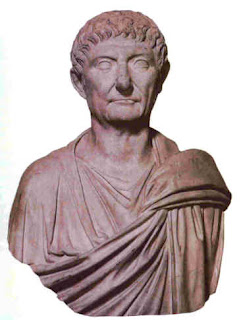 Diocletian's system of government, an answer to the murderous political chaos of the third century, was essentially an exercise in good-faith, the assumption that those in power will give way peacefully, and by their own volition, to successors, already in the wings. Better, yes, than succession by murder, the preferred practice after the death of Septimius Severus, but it still failed to recognise that power has its own attractions, whatever the risks. The late imperial system of government, absolutist and uncompromising as it was, certainly contributed to the continuing decline of the empire. Quite simply it depended too much on the capacity and talents of a limited number of individuals; for when the Emperor was good he was very, very good; and when he was bad...well, he was much more than horrid!
Posted by Anastasia F-B at 15:57