Weimar and the Freikorps 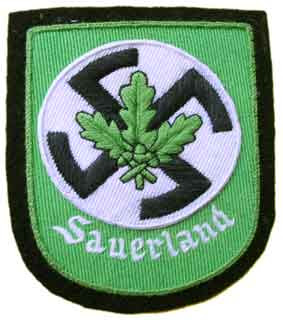 Consider the political circumstances in Germany in November and December of 1918, where an old system of rule had died but a new one was yet to be born. Friedrich Ebert, the new Social Democratic Chancellor, stressed that the task before him, the object of the German Revolution itself, was to create a stable parliamentary democracy. The challenge to this came not from the right but from the left; from people like Rosa Luxembourg, who responded sarcastically "Oh how German this German Revolution is! How proper, how pedantic, how lacking in verve and grandeur." This was a view shared by her comrades in the extreme left Spartacist League, soon to be reconstituted as the Communist Party of Germany. Over much of Germany the fragile republic came under challenge, with major risings in Berlin in January and March 1919. At first Ebert and his Minister of Defence, Gustav Noske looked to their allies in the trade union movement to provide militia forces. When no such support was offered they were obliged to turn elsewhere. It was Kurt von Schleicher, a career officer, who offered a solution to a serious problem-and that solution was the newly-organised Freikorps.

Who were they? Young men, essentially, uprooted by war, who had grown in a cult of violence; men with no past employment and no family; men who were motivated, first and foremost, not by politics, but by the appeal of adventure. A great many of them had actually been trained as Stormtroopers, the elite strike force of the Imperial Army, who wished to continue in service, or whose opportunity to serve had been frustrated by the sudden end of the war. Politically, the natural home for many of these individuals was in the nationalist right, though only a minority joined the new formations for political reasons alone. As many as 25% of the Freikorps volunteers had trained as officers. A large number of these were men of middle class origin who had received battlefield commissions, and were unhappy about losing the social and personal prestige associated with this. Even more were students or cadets, too young to have served, but anxious for the chance of action. They were, in essence the same men who had served in the Italian Arditi or the British Black and Tans. Though most really wanted to fight in the east to defend the Reich's uncertain frontiers against the Poles or the Russians, action for the sake of action was the supreme imperative. Communists, Russians or Poles: in the end it made little real difference who the enemy was.

Oh, on a point of personal information, my German great-grandfather served with Freikorps Rossbach, but-ssssh-we don’t talk about that. :-))
Posted by Anastasia F-B at 16:26