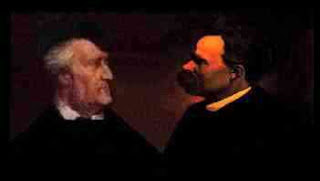 One can trace Nietzsche's disenchantment with the Wagner cult in his notebooks, where he discusses the master's addiction to luxury and glitter at his Bayreuth shrine; his misuse of the music medium; the false liberation his music brings; his desire to submit audiences to the power of his will; and above all his vanity, and yet again his vanity.

Nietzsche was maturing beyond the kind of abject devotion that Wagner, a monster of egoism, demanded. His task was "Neither to suffer so intensely from life, nor live in such a flat and emotionally deficient way, that Wagner's art would be needed as a medicine." Wagner was undermining Nietzsche's efforts to lay hold of life, so he removed himself physically from his orbit and intellectually from his cult, as he shows in Human, All Too Human and still later in The Wagner Case.
Posted by Anastasia F-B at 17:04