Crowley and the Runes 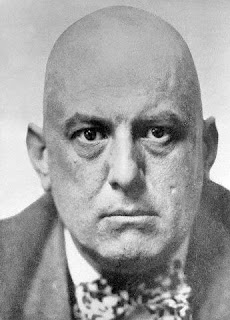 Oh, the discoveries I’m making about Aleister Crowley, a prefect monster of egoism. His writing is at best indifferent and his poetry, well, what can I say? It’s utterly dreadful! But what a marvelous self-promoter, an object for so many writers in every way better than himself. I came across him a year or so ago as the central figure in W. S. Maugham’s novel The Magician. But the author of the biography I am reading suggests that I may have encountered him even earlier than that.

I read the wonderful ghost stories of M. R. James when I was away at school, including one called Casting the Runes. Now, Crowley was up at Cambridge while James was Dean of King’s College. There is no evidence that the two men ever met but it is possible that James came to know Crowley, after he went down, by the colour of his subsequent reputation. Casting the Runes, published in 1911 in More Ghost Stories of an Antiquary, features an unpleasant Crowley-like figure by the name of Karswell, who lives in a disused Warwickshire Abbey, leading him to be known as the ‘Abbot of Lufford.’ This was no holy man; oh no;

Nobody knew what he did with himself: his servants were a horrible set of people; he invented a new religion for himself, and practiced no one could tell what appalling rites; he was very easily offended, and never forgave anybody; he had a dreadful face….he never did a kind action, and whatever influence he did exert was mischievous.