Condeming Humanism: Erasmus and the Inquisition 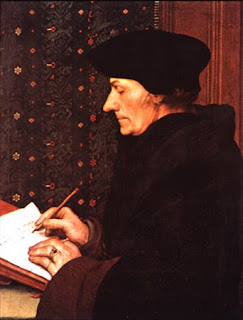 There were certainly some in Spain who welcomed the work of Erasmus, the leading Catholic humanist of the age, but the general reception was muted. The clergy were particularly resentful of his attacks on the mendicant friars. Under pressure from the religious orders, the Grand Inquisitor, Alonso Manrique de Lara, held a debate in Valladolid in March 1527 to decide if Erasmus' writings were heretical or not. The conference was suspended without decision, which was taken for a victory for the Erasmians. The following December King Charles wrote to him, assuring him that his honour and reputation 'would always be held in great esteem'

It was not to be. In 1559, the year following the death of Charles, some sixteen of Erasmus' publications were placed on the first Spanish-produced Index of forbidden books, including the Enchiridion. By this time the Inquisition had a hold on most aspects of Spanish intellectual life. The reaction against Erasmus, and Humanism in general, was one of the features of the ideological crisis that beset Spain in the second half of the sixteenth century
Posted by Anastasia F-B at 18:34