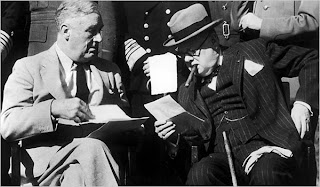 Unconditional Surrender, the declaration that the enemy powers had to lay down arms without condition or concession, was President Roosevelt's idea which he announced to the world at the end of the Casablanca Conference, on an entirely unilateral basis. For the sake of Allied unity, it was immediately endorsed by Winston Churchill, though he later admitted to being dumfounded by the announcement, and worried by its likely effect on the future course of the war.

Dwight D Eisenhower, also present at the conference, shared Churchill's misgivings, believing that such an uncompromising line would only serve to prolong the war, costing more Allied lives than was necessary. In fact, there would appear to have been few, if any, who welcomed Roosevelt's declaration of intent

It also dismayed people like Admiral Canaris and others in the German resistance, but-not surprisingly-delighted Josef Goebbels, who said "I should never have been able to think up so rousing a slogan. If our enemy tells us, we won't deal with you, our only aim is to destroy you, how can any German, whether he likes it or not, do anything but fight on with all his strength." It is surely no coincidence that the Propaganda Minister's infamous Total War Speech came a few weeks of the Casablanca edict-Now, people rise up and let the storm break loose.

Perhaps the absolutely worst thing about unconditional surrender is that it came just as the German army had suffered one of the worst defeats in its history at Stalingrad, considerably weakening the prospects for the Reich, and making it more likely that the senior command would listen to the blandishments of Canaris and others. But now they had to fight on, Nazi and anti-Nazi alike.

In the summer of 1943, with Italy on the point of abandoning the Axis, Churchill and Eisenhower's attempts to negotiate a compromise peace with Pietro Badoglio were ruined after Roosevelt held fast to unconditional surrender. In the delays that followed the Germans were able to pour troops into Italy, ensuring that Allied progress up the peninsula would be slow and painful.

Similarly, as D Day approached in 1944, George Marshall and the US joint chiefs urged Roosevelt to moderate his policy, but met with outright refusal. Even after German resistance in Normandy proved far tougher than expected Roosevelt refused to budge, despite a further appeal from Eisenhower. He defended his policy on a visit to Hawaii-when he confirmed it also applied to Japan-, drawing an example from American history, insisting that this is how U. S. Grant had dealt Robert E Lee at Appomattox in April 1865. But, of course, it was not, as those of you familiar with the history of the American Civil War will be only too well aware. Grant offered Lee and the defeated southern army terms, and very generous terms at that.

In the end the policy, though not completely discarded, was moderated after Roosevelt's death. While the Japanese surrender was declared to be 'unconditional', they were permitted to keep their Emperor. If they had not, while one cannot be absolutely certain, it is possible that America's nuclear bluff would have been called, making an invasion of the Home Islands necessary. The cost in lives of such an endeavour can only be imagined.
Posted by Anastasia F-B at 16:54