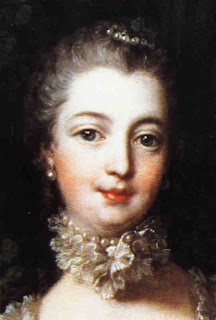 Jeanne-Antoinette Poisson, Marquise de Pompadour, better known simply as Madame de Pompadour, was inn many ways she was a quite extraordinary woman, a commoner and a member of the Third Estate, who grew to be one of the most powerful political figures in eighteenth century France.

She established her position by beauty; and when beauty started to go, she maintained it by intelligence. She gave an added brilliance to the court of Louis XV that might otherwise have sunk under the diffident character of that unimaginative and melancholy man.

Yet, in the long-term, the 'Pompadour effect' was damaging for both the monarchy and for France. After the War of the Austrian Succession, when economy was the thing the French state needed most, she drew more and more resources into the lavish court. Her influence over Louis increased markedly through the 1750s, to the point where he allowed her considerable leeway in the determination of policy over a whole range of issues, from military matters to foreign affairs. Her importance was such that she was even approached in 1755 by Wenzel Anton Graf Kaunitz, a prominent Austrian diplomat, asking her to intervene in the negotiations which led to the 1756 Treaty of Versailles.

This was the beginning of the so-called Diplomatic Revolution, which ended long antagonism between France and Austria. It also led to France's disastrous involvement in the Seven Years War against England and Prussia. After the defeat of France at the Battle of Rossbach in 1757, she is alleged to have remarked après nous, le déluge. France emerged from the war diminished and virtually bankrupt. By the time of Pompadour's death in 1764 the waters were already pushing hard against the walls of the dam
Posted by Anastasia F-B at 16:56