Attila and the Empire of the Will 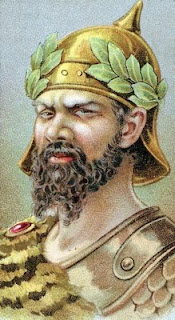 There is little doubt that Attila was skilled, both as a soldier and more generally as the ruler of a great Hun confederation. He was also rampaging and brutal, though given the nature of his rule, and the peoples he ruled over, he had little alternative. Despite justifiable Roman fears of the Hun threat, not all of the contemporary assessments of Attila are perhaps as negative as one might assume. Renatus Profuturus Frigeridus, a Roman historian, describes him thus;

Of middle height, he was manly in apperance and well made, neither too frail nor too heavy; he was quick of wit and agile of limb, a very practiced horseman and a skilful archer; he was indefatigable with a spear. A born warrior; he was renowned for the arts of peace, without avarice and little swayed by desire, endowed with gifts of the mind, not swerving from his purpose for any kind of evil instigation. He bore wrongs with utmost patience and loved labour. Undaunted by danger, he was excelled by none in the endurance of hunger, thirst and vigil.

Others who knew him remarked that he was not himself greedy for plunder. When he was visited by a Roman diplomatic mission it was noted that he drank from a simple wooden bowl, as might be used by the lowest of his followers.

What he did have a taste for, though, was power; and he was utterly ruthless in maintaining his position at the head of a great barbarian alliance, that included not only his own Huns but also Ostrogoths, Gepids, Franks, Rugians, Sciri, Burgundians and Thuringians. And the only way that he could maintain his hold, and ensure their loyalty, was by finding fresh opportunities for plunder and yet more plunder. His empire, in other words, was an alliance for robbery and destruction. It was also an 'Empire of the Will', so to say, for reasons that should become a little clearer as I proceed.

So, in his quest for plunder, Attila was drawn over the borders of the Roman Empire, first in the east, where he raided in 440, 442 and again in 447. The object was not to conquer but to draw out all of the sources of wealth, so much so that by 450 the Empire was close to economic exhaustion. The whole destructive, and it might be said, self-destructive campaign, continued, first in Gaul and then in Italy, where the waves were broken. Of this John Julius Norwich has written;

Had the Hunnish army not been halted in these two successive campaigns, had its leader toppled Valentinian from his throne and set up his own capital in Ravenna or Rome, there is little doubt that both Gaul and Italy would have been reduced to spiritual and cultural deserts, just as surely and just as completely as the Balkan peninsula was reduced by the Ottoman Turks a thousand years later. ("Byzantium. The Early Centuries", 1988, p. 157)

In the end this great threat came to nothing for one simple reason: Attila was a man caught between two worlds; that of the barbarian nomads, and that of the settled urban world of the Romans. He needed war simply to survive, though old fashioned mounted archery was no longer enough. To take the great cities of the empire he needed siege equipment; he needed to keep their populations under control; to build an administration; to make laws. He did none of these things, and never rose to the real challenge of imperial rule, unlike, say, Genghis Khan, with whom otherwise he mighty stand comparison. In the end the vast Hunnish empire simply imploded on Attila's death in 453, leaving little more than a savage memory.

The true victors are those who create history: Attila was just passing through. 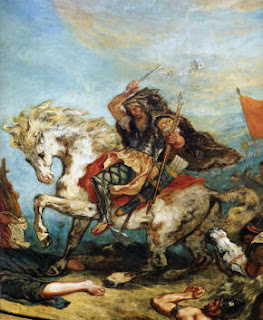