Characters in Literature I Hate 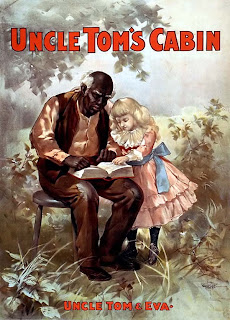 Well, perhaps hate is too strong a word though there are a lot that I find quite tiresome, particularly the feckless Harold Skimpole in Charles Dickens's Bleak House, and just about everyone in George Bernard Shaw's overrated and bloodless plays.

But the one character who had the most negative impact on me was Uncle Tom. I used to wonder what black Americans meant when they used the term in such a disparaging way towards certain members of their community; I used to wonder, that is, until I opened the pages of Uncle Tom's Cabin!

Yes, I know that Harriet Beecher Stowe intended him as a 'noble hero.' Yes, I know that he demonstrates a certain form of Christian resignation and acceptance, that would have been wholly understandable to a nineteenth century readership. Yes, I know that it was a message for the times. But when I reached such a stage of irritation with him, when I began to feel that he needed a 'damned good whipping' to rouse him from his dog-like torpor, then I simply knew I had to stop reading. To be put in the frame of mind of a slave owner in the Old South was far from being a comfortable experience! :))
Posted by Anastasia F-B at 17:27