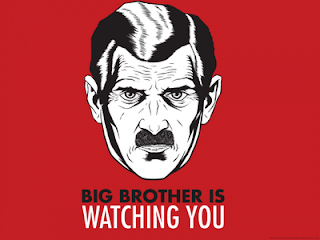 I wrote this piece on the suggestion of a user I met on another website. For me it’s also a kind of exegesis, based on the discoveries I’m making in reading Orwell’s journalism and essays, in every way more revealing than his novels. Before proceeding I should say that the most important book to read on the issues I’m about to explore is Homage to Catalonia, Orwell’s account of his experience in Spain, where he served with a Marxist militia until the summer of 1937, when he fled the Republic in fear of his life, not from the fascists but from the communists.

I’ve heard it said that Nineteen Eighty-Four, Orwell’s nightmare dystopia, represents an amalgam of totalitarian thought; a synthesis, if you like, of fascism and communism. It's not: this is a future based on Stalinism and Stalinism alone. Why should this be? Precisely because Orwell saw Stalinism in action in Spain; he saw the terror, the abuse of power, the murder of opponents, the adulation of a god-like leader, the torture of language and simple truths; he saw two plus two being made to make five.

It’s still believed-and I’ve noted this from comments I read elsewhere-that the Soviets supported the Spanish Republic with the intention of advancing a social revolution; they did not. When they came to Spain a revolution was already underway, guided by the native anarchist movement, always much stronger than the communists, and by local non-Soviet Marxist parties like the Partido Obrero Unificación Marxista, known simply as the POUM, in whose militia Orwell served, though by accident rather than design. The Soviets came not to start a revolution; they came to stop one.

In 1933 Stalin got what was perhaps the greatest political shock of his life when Hitler came to power, destroying the KPD in the process, the strongest communist party outside Russia. It made nonsense of the Comintern’s ultra-left ‘Third Period’ strategy, which saw the principal enemy as democratic socialists, not fascists. It also considerably weakened the security of the Soviet state. So, in response, he moved towards a new strategy, that of the popular front, uniting all ‘democratic’ opinion, from liberals to communists, in an attempt to arrest the further advance of the right. Stalin was determined before all else to obtain the support of ‘bourgeois’ parties and ‘bourgeois’ governments. Spain saw this policy in action. It also suited his ends to turn on other groups on the Marxist left, groups like the POUM, who were accused of being ‘Trotsky Fascists’ on much the same basis as those accused in the Moscow show trials.

So, Orwell found himself caught in the currents of history. He found himself involved in a civil war within a civil war, as the communists in the International Brigades turned their guns on the POUM in Barcelona in May 1937. He saw the NKVD in action, with people-socialists and anarchists-imprisoned without trail, including some of his friends. He saw black turned into white and back into white again. He saw history rewritten and language abused, with yesterday’s orthodoxy becoming today’s heresy.

Consider this passage from his essay "Inside the Whale":

…the USSR is no more scrupulous in its foreign policy than the rest of the Great Powers. Alliances, changes of front, etc. which only make sense as part of a game of power politics have to be explained and justified in terms of international Socialism. Evert time Stalin swaps partners, ‘Marxism’ has to be hammered into a new shape. This entails sudden and violent changes of ‘line’, purges, denunciations, systematic destruction of party literature, etc. etc. Every Communist is in fact liable at any moment to have to alter his most fundamental convictions or leave the party. The unquestionable dogma of Monday may become the damnable heresy of Tuesday.

This is it: this is the world of Big Brother, of the Ministry of Truth, of Newspeak. There is no Nazi component-beyond simple totalitarianism-because, you see, Hitler said what he thought and thought what he said. There were no intellectual perversions in National Socialism because there was no intellect. There was in communism. Without communism, the communism of Stalin, I would go so far as to say that Nineteen Eighty-Four would have been inconceivable, inconceivable by Orwell anyway. That would only have left Yevgeny Zamyatin to point to a possible future based on a murderous present.
Posted by Anastasia F-B at 00:39