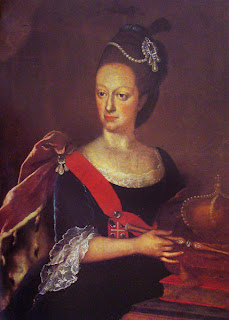 Maria I, Queen of Portugal from 1777 to 1816, was a contemporary of George III who also suffered from a form of mental collapse. Her grandfather, Philip V of Spain, and her granduncle, Ferdinand VI, had also experienced increasingly severe bouts of insanity. I note that the Wikipedia article on Maria says that she may have been afflicted by porphyria, which seems to be turning into a convenient 'one size fits all' explanation for royal lunacy. :-))

Her symptoms seem to have been nothing like those of George, and far more like those of her grandfather, who was quite simply mad! Amongst other things he convinced himself that he was unable to walk because his feet were different sizes. Maria descended into her own madness in January 1792. Always prone to religious mania, she convinced herself that she was in hell, telling her doctors that they might cure madness but they could not reverse the decrees of fate. The Portuguese government sent for Francis Willis, the same doctor who had treated George, but he found that Maria's condition did not respond to his 'scientific method.' It would appear that the Portuguese queen was suffering from some extreme form of bi-polar disorder, in which she switched rapidly from one extreme mood to another. Maria, unlike George, had no respite from her condition, which continued until her death in 1816.
Posted by Anastasia F-B at 17:56