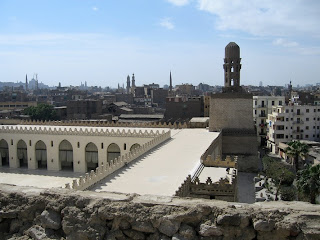 Have you ever heard of Caliph al-Hakim bi-Amr Allah? No?; well here is a story!

Caliph Hakim was a member of the Fatimid dynasty, and ruler of Egypt from 996 until his death in 1021. He was, to say the least, a highly eccentric individual, sometimes referred to as the Mad Caliph. Amongst other things, he prohibited the eating of grapes and the playing of chess, and ordered the people of Cairo to work at night and sleep during the day! His persecutions were real enough, though like many of his other arbitrary measures, they tottered between the gratuitously vindictive and the outright ridiculous. Christians were made to wear huge crosses and Jews a golden calf around their necks. His persecutions, moreover, also extended to Sunni Muslims.

There are other examples of Muslim persecution, the most notorious of which is probably the wholesale massacre of the Jews of Granada in southern Spain in 1066, following a particularly vicious hate campaign. Also in Spain, the fundamentalist Almoravids forcibly transported many Christians to Morocco in the twelfth century. However, it remains true, in spite of these exceptions, that there is little of the wholesale massacre, persecution, forced conversion and expulsion of minorities that was to be a recurrent theme in the history of Christian Europe.
Posted by Anastasia F-B at 16:50