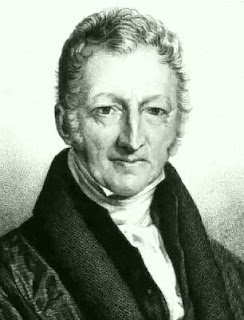 Thomas Malthus and his work on economics and population generated a lot of vilification and misunderstanding while he was alive, arguably more than any other comprable figure. I suppose his image is the equivalent, in the real world, to that of Charles Dickens’ Gradgrind; calculating and rather joyless. Know affectionately as 'Old Pop' to his pupils, offended religionists called him the 'Malthusian Devil'. For Karl Marx he was a 'shameless sycophant of the ruling class.' Poets like Coleridge, Byron and Southey cast him in the role of the misanthrope; and for William Cobbett he was, quite simply, 'a monster.' But, as so often in cases like this, people, even highly informed people, fail to draw a distinction between the thinker and the thought. The thought is stark, cold and alarming so, too, must be the thinker. The evidence would suggest otherwise!