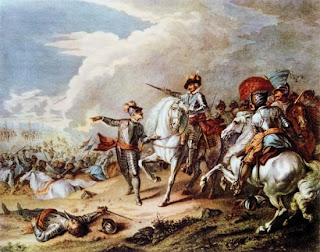 The Battle of Naseby was, of course, the penultimate Puritan victory in the First English Civil War, a victory of the 'new' England over the 'old'; and Christmas, and all that was associated with it, was very much part of the old. The festival was hated, in the first place, because it was 'popish', and in the second, because it was 'pagan'; it had no authority in scripture and it was the occasion for unseemly and drunken revels, presided over by the Lord of Misrule.

In the 1580s Philip Stubbes had written in The Anatomie of Abuses that;

The festival had also become something of a political battleground between the stricter Protestant sects and Catholic recusants in England; for while it was condemned by the one it was growing in popularity with the other. Catholics, moreover, were quite happy to combine religious devotion with an attachment to the more profane aspects of Christmas celebration. Dorothy Lawson, a Catholic gentlewomam, was noted for celebrating "in both kinds...corporally and spiritually." Christmas thus became a prime target during the period of Puritan ascendency, both before and after Naseby.

The attack began with attempts to divorce the religious from the secular elements of the holiday, with Parliamentary ordinances from 1642 onwards calling for a more 'seemly' observation. The campaign was stepped up in early 1645 with the publication of the Directory of Public Worship, which plainly stated that "Festival days, vulgarly called Holy days, having no Warrent in the Word of God, are not to be continued."

The final victory over the King also saw the victory over Christmas. In June 1647 it was abolished outright. Neverthless, the festival remained popular with ordinary people, and fresh ordinances had to be issued throughout the period of both the Commonwealth and the Protectorate; even people attending church on 25 December were liable for arrest and interrogation by the army. The World is Turned Upside Down was part of a much wider popular and literary response to the whole Puritan campaign, including the wonderful satire The Arraignment, Conviction and Imprisioning of Christmas, printed by 'Simon Minced Pie' for 'Cicely Plum Pottage.'

Alas, England, ruled by Cromwell, in much the same fashion as Narnia was by the White Witch, was a land 'where it was always winter and never Christmas.' Old Father Christmas only returned with Summer and the King!
Posted by Anastasia F-B at 17:17