Sodomy, the Bishop and the Ghost 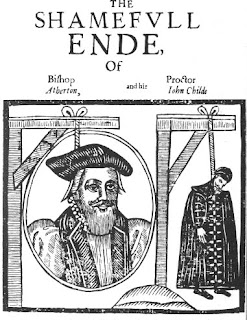 You’ve heard, I expect, of the mother-in-law from hell? Now you are about to encounter one for real!

My story, a true one, takes us back to seventeenth century Ireland and England. In December of 1640 John Atherton, Bishop of Lismore, was convicted and sentenced to death for, to use the legal commentary of the day, “the crime not to be named.” Well, I shall name it: Bishop Atherton was a bugger, and I mean that in the literal sense of the term!

Atherton was English and a Protestant. He had come to Ireland because the official Church of Ireland, also Protestant, had plenty of opportunities for advancement in a country where the Reformation had the most superficial roots, and had been appointed to the bishopric in 1636. Now at the peak of his career Atherton’s ascent was about to be followed by an equally rapid descent.

In his hometown of Minehead in Somerset something odd was happening. People were saying that Atherton’s mother-in-law, Susan Leakey, was spreading stories about the new Bishop of Lismore. The only problem was she had been dead for well over a year...

Reports of her revelations reached William Laud, the Archbishop of Canterbury, who appointed three magistrates to investigate in February 1637. All of the witnesses interviewed said that they had indeed seen the ghost of Susan Leakey, including Elizabeth Leakey, her daughter-in-law, wife of Alexander, her son. Elizabeth reported that while Susan was on her deathbed in November 1634 she threatened to return into the world of the living. “What, will you be a devil?” she asked. “No, but I will come in the devil’s likeness.”

Return she did, accompanied by all sorts of weird happenings. The Leakey’s nephew, a teenage boy, died, saying that he was being strangled by his grandmother. An apparition was seen, making its way towards Elizabeth’s house, finally appearing in her bedroom. There she told her daughter-in-law to go to Ireland with a message for Joan Atherton, the wife of the bishop. The magistrates asked what the message was but Elizabeth refused to answer, saying she would tell only the King himself and even then only if he commanded.

The magistrates refused to accept these stories, believing the whole thing to be fraudulent. Laud himself concluded that it was probably based on some attempt to extort money from Atherton. But matters were about to get ever more serious.

In Ireland Atherton was making enemies. In the summer of 1640, under circumstances that are not entirely clear, his steward submitted a petition to the parliament in Dublin, accusing Atherton of sodomy, a capital crime. This seemed to tie in with the appearance of the apparition in England, the tale that Elizabeth would only repeat if commanded to do so by the king in person.

Other stories about the bishop started to come out; that he was a rapist, a fornicator and an adulterer. He was also accused of incest, sleeping with his wife’s sister, which turned out to be true. Report of this made its way to the Long Parliament in England, where Thomas Wentworth, the Lord Deputy of Ireland, the man who had appointed Atherton, was himself under attack. In the summer of 1641 a pamphlet was published, detailing Atherton’s sexual excesses. The author, rejecting the scepticism of the investigation of 1637, said that Mother Leakey had commanded Elizabeth to tell Atherton to repent or be hanged.

Mother Leakey was set to become one of the ghostly legends of Somerset. Atherton was hanged, either the victim of a political frame-up or supernatural malice. You decide!
Posted by Anastasia F-B at 16:22