The Calendar Riot-a History of a Myth 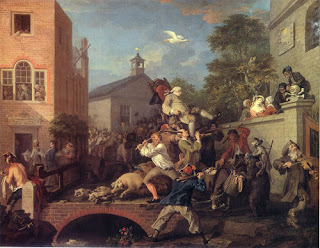 Have you heard, I wonder, of the Calendar Riot of 1752, when people in England took exception to the 'loss' of eleven days of their lives when the old Julian Calander was replaced by the Gregorian? A wonderful story but-alas-a fiction, one that has been repeated time and again. It even makes an appearance in the relevant edition of the Oxford History of England. Encyclopedia Britannica once put these alleged riots down to the 'vulgar and ignorant prejudice of the mob'.

It's one of these stories that everyone seems to know about but nobody can quite pinpoint. The whole thing is a wonderful example of the circularity that one tends to find in certain forms of historical reportage: textbooks cited textbooks which cited other textbooks, and so on and so on! In other words, it was an event quite without witness. All such references are reducible to two sources only: to Lord Chesterfield and to William Hogarth.

It was Chesterfield who was behind the Calendar Reform Act of 1751. In one of his letters to his son he writes, "Every numerous assembly is a mob, let the individuals who compose it be what they will. Mere sense is never to be talked to a mob; their passions, their sentiments, their senses and their seeming interests alone are to be applied to. Understanding have they collectively none." But what he was doing here was boasting of his skill in having the Bill passed through the Lords. The 'mob' in question was his fellow peers!

So, this only leaves Hogarth's 1755 depiction of An Election Entertainment, in which a placard is shown, carrying the slogan 'Give us our eleven days.' According to Ronald Paulson, author of Hogarth, His Life, Art and Times, this shows that "...the Oxfordshire people...are specifically rioting, as historically the London crowd did, to preserve the 'Eleven Days' the government stole from them in September 1752 by changing the calendar."

And thus it was that the 'calendar riot' was born. The only problem is that the election campaign depicted was one which concluded in 1754, after a very lengthy contest between Court Whigs and Jacobite Tories. Literally every issue between the two factions was brought up, including the question of calendar reform. The Tories attacked the Whigs for every deviation, including their alleged favoritism towards foreign Jews and the 'Popish' calendar. Hogarth's placard, in his usual rumbustious fashion, is no more than part of a satire on the character of the debate. It was not an observation of actual crowd behaviour. The whole thing, as one author has rightly said, was simply a 'magnificent myth.'
Posted by Anastasia F-B at 17:20