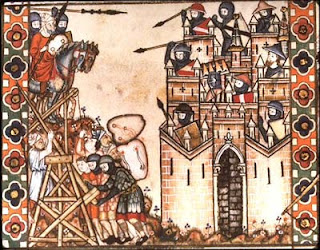 Now, here is an interesting story for you, a story of an English bishop who led a 'crusade', no less, against the schismatic French. His name was Henry Despenser, Bishop of Norwich and nuncio of Pope Urban VI, who took an army into the Low Countries under the sign of the cross in May, 1383. Some years prior to this Urban had sent a bull to the Archbishop of Canterbury, offering crusading indulgences to all those who took arms against Clement VII, his rival in Avignon, who was supported by France and Scotland. Henry Dispenser, described as 'warlike' by his contemporaries, was quick to make his own plans for a crusading venture, which Urban readily approved.

The opportunity came when the people of Ghent rebelled against Louis of Male, Count of Flanders, a supporter of Clement. This also attracted the interest of the English crown, which had important commercial interests in Flanders, and was keen to support the burghers of Ghent. The matter was made all the more urgent after the Flemings were defeated by a French army at the Battle of Roosebeke in November, 1382. Because of this, and the danger the victory presented to English economic interests, Richard II granted Dispenser permission to raise an army. A crusade had the added advantage to Richard in that the expenses could all be met by the sale of Papal indulgences, rather than parliamentary grant.

Despenser and his army landed at Calais on 16 May. Soon after they attacked and slaughtered the French garrison at Gravelines, before moving on to Dunkirk, where they fought and defeated Louis of Male. It was after this high point that things started to go wrong. An attempt to take Ypres was a failure, after which the gains of the spring were lost, and towns previously captured by the crusaders were retaken by the enemy. Gravelines was only given up after Despenser, in his anger, ordered it to be sacked. By October most of the army was back in England.

Despenser was impeached before Parliament for his failure. His temporalities were confiscated and he was ordered to behave in a manner 'befitting his episcopal dignity.' The massacre at Gravelines also did much to discredit the Urbanist cause, just as the unscrupulous sale of indulgences had roused the criticism of John Wycliff and the new Lollard movement. Wycliff denounced both Popes as 'power made'. God's forgiveness, he argued still further, could not be purchased, and that the grant of remission of sins for killing fellow Christians was 'an affront to Christ.'
Posted by Anastasia F-B at 17:06