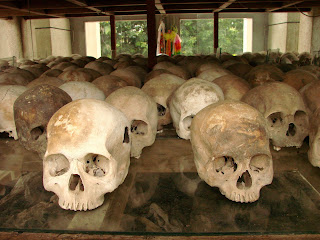 It’s largely escaped the attention of the world-it’s escaped the attention of most Cambodians-but after all these years some of the architects of the Khmer Rouge genocide are at last on trial. The principle trial, not expected to conclude until next year, is of Kang Kek lew, better know simply as ‘Comrade Duch, head of Pol Pot’s secret police. Duch, who once said that it was a rule of the Party that whoever was arrested must die, is accused of the murder of close on two million people. It was he who was responsible for setting up the infamous Toul Sleng prison in Phnom Penn, whose rules, too bizarre even to be described as Kafkaesque, included one admonishing captives from crying out while under torture.

It’s really difficult for me to imagine the horror of that world, a world where to be suspect was to be arrested; where to be arrested was to be guilty and where to be guilty was to be dead. But what is even more difficult to accept is the cynicism of the international community that played politics with Cambodia even after the fall of the unspeakably vile Pol Pot. It’s difficult to believe now that in the game of Cold War politics that the United States aligned itself with China in supporting the Khmer Rouge ‘government in exile’ simply to get back at the Vietnamese and the Soviets.

So the victims were denied any form of justice for years after until most of the survivors died and the dead were forgotten. Cambodia is a young nation and most of the people alive now have no memory of ‘Democratic Kampuchea.’ But the Duch trial, all too late, and far too slow, is still welcome, particularly when one considers that members of the present Cambodian government, including Hun Sen, the prime minister, were once Khmer Rouge cadres. It was only in 2004 that the Cambodian government, in negotiation with the UN, finally agreed that Duch and other senior officials of the old regime should face trail.

I’ve been to Cambodia, been to Toul Sleng and Choeung Ek, the killing field just outside the capital, where tiny children were bludgeoned to death to save the cost of a bullet. They are grim places. It is of some comfort, limited as it may be, that the dead are at last able to cry out in defiance of the rules set by ‘Brother Number One’ and ‘Comrade Duch.’
Posted by Anastasia F-B at 17:15