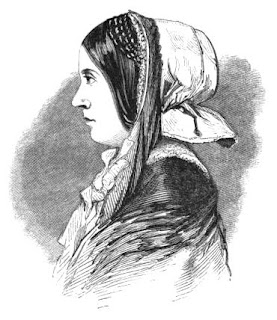 Female murderers generally excited extra interest among the nineteenth centuty public, especially as one goes deeper into the reign of Queen Victoria, which introduced all sorts of new notions about the ideal women, her outlook, her attitudes and her place in society. As today the popular press took a prurient interest in these matters, tending to 'demonise' the perpetrators of murder, because only monsters could act in a way that was 'contrary to nature'. Readers were able to lap up in detail the story of Constance Kent, who is alleged to have slit her stepbrother's throat before disposing of his body in an outhouse; or Madeleine Smith, a Glasgow socialite who is alleged to have poisioned her French lover.

There was a definite set of double-standards in operation that made cases like this all the more sensational; for while deviant behaviour in men was deplorable, deviant behaviour by women was unacceptable, especially when it was directed against men, when it tended to be viewed as a hideous perversion. In a sense these women, mediated through the popular press, ceased to have all the qualities that made them women, or human at all. They were most often depicted as 'ugly', 'masculine', 'sub-human' with almost no attempts made to uncover motives. In many ways the press reports seem to hark back to an earlier age, with a murderess presented as a witch-like figure, who had outraged the orthodoxy of Victorian family values. After all, gentle, submissive, passive, self-sacrificing creatures do not strangle babies, no matter how desperate they are, nor do they poison friends and husbands to obtain a little extra income
Posted by Anastasia F-B at 17:06