To Kill a King: the Story of the North Berwick Witches 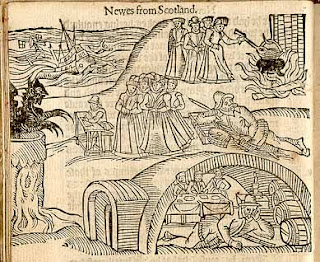 Picture the scene. It’s September 1589; the wind is howling and the rain lashing. A ship tries to leave the port of Burntisland on the north side of the Firth of Forth in Scotland, making for Leith on the south; not a long journey, but the weather is fierce, and the wind blows in the wrong direction. On board is Jean Kennedy, destined to be a lady-in waiting to Anne of Denmark, soon to be Queen of Scotland. Also on board are the jewels that James VI, the young king, has bought for his prospective wife. The boat struggles on, but is caught on a wave, carried into the air, and crashes down on a nearby vessel. Jean is drowned, her companions are drowned; the jewels are lost. On the opposite bank of the estuary near Leith a dead cat is found, weighed down with the bones of a man.

Now the scene switches, all the way across the North Sea. That same month fifteen-year-old Anne, the daughter of King Frederick II, sets out for her new home. Her vessel is beaten back to the Norwegian coast, where it is forced to take refuge. In Scotland James anxiously awaits. Anne does not come; no news comes. The King decides to set out across the sea in person, carried forward by the winds that had beaten his Queen back. It’s not until early the next month that he finally receives news that Anne’s flotilla has been diverted to Oslo. The couple, now united, decide to winter in Copenhagen.

It’s while he is in Denmark that James becomes aware that the mishaps that have afflicted him and his bride are being blamed on witchcraft. The following summer, after James and Anne had crossed to Scotland, several women are executed in Copenhagen on a charge of having bewitched the princess’ fleet.

A few weeks beforehand a Scottish connection is discovered. A number of people are arrested, women mostly, many of then from the town of North Berwick at the mouth of the Forth. The arrested include Anne Koldings, who claimed to have long practiced magic. But the charge that emerges is not just witchcraft; it’s attempted regicide. It was Anne and her companions who had raised the storms that drowned Jean Kennedy and scattered the king’s fleet as it returned from Denmark. James and his wife arrive home safely, though their fleet has been scattered by fresh April storms.

More arrests follow, and the focus of interest switches to a coven held at St. Andrew’s Auld Kirk in North Berwick, where the Devil appeared to his devotees at night. There the conspiracy to murder the King takes shape. Those implicated include one Agnes Sampson, who convinced James of the truth of the allegations, so is said, by repeating the words he had used to Anne on their wedding night.

The trails that follow, which were conducted over a two year period, also touch on the high politics of the day, as Francis Stewart, Earl of Bothwell, James’ mercurial cousin, is implicated in the attempted regicide. The king personally supervises the torture of some of the suspects, and in an act of personal vindictiveness succeeds in having Eupheme MacCalzen burned alive without the ‘mercy’ of strangulation beforehand. Agnes, too, is executed along with several others, after having confessed under the extremes of torture. 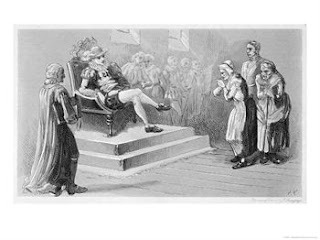