The Wickedest Woman in History 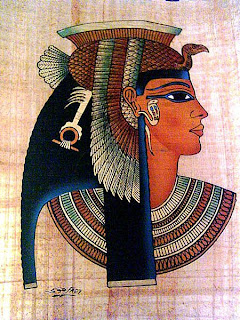 The legend of Cleopatra, the great seductress, was born as part of a piece of political spin, of which she is not even the main subject. We all know that history is written by the victors, and this was never truer than at the end of the Roman Civil Wars. Octavian-later Augustus-prevailed over his great rival, Mark Anthony, who after his death was depicted in the propaganda of the day as a Roman who had been unmanned by his flirtation with the 'degenerate' east. Cleopatra was cast as the very symbol of that degeneracy, the whore of the Canopus, irredeemably foreign, exotic and profoundly un-Roman.

When Antony's descendants, the emperors Caligula, Claudius and Nero, showed signs of adopting the 'eastern fashion' at court, the negative images of Cleopatra were revived in various art forms, as the great seductress, dangerous not just to individual men, but the traditional Roman conception of republican virtue. According to the historian, Dio Cassius, it was because of her that Anthony became an effeminate creature, who lost all of his virile and manly skills. Cleopatra, in other words, was a warning against the dangers of allowing a woman to become too powerful, in politics or in love. In the fourth century Aurelius Victor added to her corrupting and seductive image when he wrote, "She was so lustful that she often prostituted herself and so beautiful that with their lives for a night with her."

And thus it is that she progressed down the centuries, refashioned in accordance with contemporary taste. In the Medieval and Renaissance periods she was depicted as a great beauty; and, as we all know, since great beauties are always blonde, Cleopatra became a blonde! The traditional image only changed somewhat with the publication in France and England in the sixteenth centuries of translations of Plutarch's Parallel Lives, which gives a slightly more sympathetic, and accurate, depiction of the real woman, and was to be the chief source for Shakespeare's Anthony and Cleopatra.

But it was really only in the nineteenth century that it became fashionable to depict her as non-European, as in Delecroix's painting Cleopatra. She was by now the great femme fatale, portrayed as such in a whole range of artistic media, cruel, exotic, insatiable. For puritan societies, whether Roman or Victorian, she titillated and stimulated every prurient instinct; and in this shape she made her way to Hollywood. No tedious 'Little Woman' or 'Good Wife' she! When Cecil B. De Mille offered the part in his movie Cleopatra to Claudette Colbert he asked "How would you like to be the wickedest woman in history?" What female could possibly resist an offer like that? :-))