The Piper at the Gates of Dawn 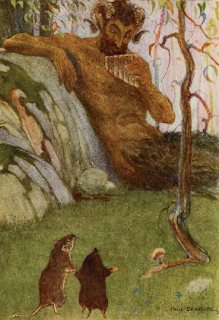 This is the passage from The Wind in the Willows where Mole and Ratty, looking on the riverside for the missing baby otter, come across the Great God Pan himself. It moves me so much, more than I can say.

Then suddenly the Mole felt a great Awe fall upon him, an awe that turned his muscles to water, bowed his head, and rooted his feet to the ground. It was no panic terror--indeed he felt wonderfully at peace and happy--but it was an awe that smote and held him and, without seeing, he knew it could only mean that some august Presence was very, very near. With difficulty he turned to look for his friend. and saw him at his side cowed, stricken, and trembling violently. And still there was utter silence in the populous bird-haunted branches around them; and still the light grew and grew.

Perhaps he would never have dared to raise his eyes, but that, though the piping was now hushed, the call and the summons seemed still dominant and imperious. He might not refuse, were Death himself waiting to strike him instantly, once he had looked with mortal eye on things rightly kept hidden. Trembling he obeyed, and raised his humble head; and then, in that utter clearness of the imminent dawn, while Nature, flushed with fulness of incredible colour, seemed to hold her breath for the event, he looked in the very eyes of the Friend and Helper; saw the backward sweep of the curved horns, gleaming in the growing daylight; saw the stern, hooked nose between the kindly eyes that were looking down on them humourously, while the bearded mouth broke into a half-smile at the corners; saw the rippling muscles on the arm that lay across the broad chest, the long supple hand still holding the pan-pipes only just fallen away from the parted lips; saw the splendid curves of the shaggy limbs disposed in majestic ease on the sward; saw, last of all, nestling between his very hooves, sleeping soundly in entire peace and contentment, the little, round, podgy, childish form of the baby otter. All this he saw, for one moment breathless and intense, vivid on the morning sky; and still, as he looked, he lived; and still, as he lived, he wondered.

`Rat!' he found breath to whisper, shaking. `Are you afraid?'

`Afraid?' murmured the Rat, his eyes shining with unutterable love. `Afraid! Of him? O, never, never! And yet--and yet-- O, Mole, I am afraid!'

Then the two animals, crouching to the earth, bowed their heads and did worship.

Sudden and magnificent, the sun's broad golden disc showed itself over the horizon facing them; and the first rays, shooting across the level water-meadows, took the animals full in the eyes and dazzled them. When they were able to look once more, the Vision had vanished, and the air was full of the carol of birds that hailed the dawn.
Posted by Anastasia F-B at 17:23