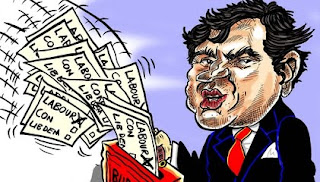 According to a report by Toby Helms in The Observer Joker Brown, 'the best man for the job', could be the last leader of the last Labour government. Yes, you read that correctly-the last ever Labour government. It's not often that The Observer manages to put a little extra spring in my step and gleam in my eyes, but it managed it this Sunday. Seemingly the only hope (oh, God; surely not!) is for the electorate to be offered a chance to change the voting system, at least it is according to Compass, a left-wing pressure group, in a report headed The Last Labour Government. Oh, say that again; say that again!

I assume that these people want the new system to be in place by next spring, though it's not quite clear from the report. What is clear is the horror that David Cameron will inflict on Noo Labour after a victory on the old voting system. Their representation at Westminster, the report continues, would be slashed from 349 at present to a rump of 130 in opposition.

This collapse is partially explained, in the Compass perspective, by the greater likelihood of Scottish independence if the Tories win, the argument here being that they are much less popular in the north and the Scots won't be able to settle down under a government of the right. In that event Labour would lose the 'block vote' of forty-one MPs whose only function at Westminster, so far as I can see, is to act as lobby fodder. But it would also mean the end of the 'Scottish Raj.' How will we ever manage without the Broonies in future? :-)

Seriously, I would be sorry to see the Union end and Scotland and England go their separate ways. But the present situation simply can't continue, with Scottish MPs determining policy for England when English MPs have no say on policy for Scotland. What we can never again have is a situation where a minority Labour government is propped up by the votes of Scottish and Welsh MPs. That's the wave of the past.

The second threat detailed by the report is Cameron's plan to cut the number of MPs by ten per cent. This will hit Labour hardest because the biggest reduction will be in areas which have seen the greatest decline in population, most notably the old fiefdoms in Wales and the industrial heartlands. So, we can add a likely loss of another forty-five seats to the Scottish block.

The game is changing, Compass concludes. Voting reform is the only way for Labour to avoid not just a crushing defeat but the strong chance that they may never govern again:

A referendum moves the party from zero chance of the Tories not losing next May to striking distance of a hung parliament and Labour the biggest single party. The decision could decide not just Labour's future for one or two parliaments, not even for a generation, but for ever.

It's super, is it not? It gives an almost transparent view of the intensity of the panic among Noo Labour. They are capable literally of anything in their desperation to hang on to government, possibly even manipulation of the voting system to their own self-serving ends. There is no phony nod to 'fairness' here, nothing of the Liberal Democrat argument. It's about power and nothing besides.

Of one thing I am certain: Noo Labour has done such harm to this country over the last twelve years that the thought of them ever again forming a government is just too awful to contemplate. I welcome the message of this report: it shows just how important it is to retain our present system of voting, just as it is to weed out the Old Sarums, all those socialist rotten boroughs that prop up this rotten government. In this regard the next election might very well be as important as that of 1830. Reform, real reform, is on the Tory side.

I wrote this earlier today but I see from tonight's news broadcast that the Joker has made 'electoral reform' part of his package to be presented to the voters next year. Well, now you know why.
Posted by Anastasia F-B at 17:55