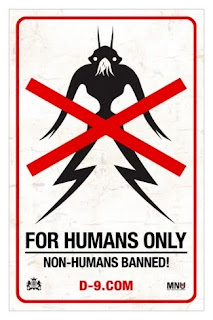 District 9, directed by Neill Blomkamp, is the first movie I think I have ever seen set in South Africa. More than that, it’s the first South African movie I’ve ever seen. It’s science fiction, a long way from being my favourite genre. But this was different, something quite special. There are so many cultural and historical references that will be readily understood by people even with only a passing knowledge of the recent history of South Africa, not simply the Apartheid era-though the message here is obvious-but the steadily shifting attitudes towards the continuing migration from Robert Mugabe’s Zimbabwe.

It begins in the style of a running news report or documentary being built up from a combination of commentaries and interviews. The setting is Johannesburg, where a large alien craft is stranded, hovering above the city. The travellers are rescued and brought to earth, where they are settled in District 9. Picture a place like Soweto and then you can picture District 9. The aliens themselves are human-sized, or slightly larger, and insect-like in appearance. After the initial curiosity they incur almost universal loathing, being referred to as ‘prawns.’ To me they looked more like cockroaches but when I whispered this to my boyfriend he reminded me of the associations with Rwandan Genocide. Still, I suppose this gives you some understanding of exactly how I perceived them, as creatures I would not chose to see living anywhere near me.

So, responding to general hostility, the government decides to resettle the ‘prawns’ –already subject to forms of unofficial apartheid uniting blacks and whites-away from District 9 to a new settlement to the north of Jo'burg, to what is eventually admitted to be little better than a concentration camp. The task of eviction, carried out with minimum notice and maximum brutality is delegated to an organisation called Multinational United or MNU, a private military contractor. The operation itself is headed by one Wilkus van de Merve, played by Shartlo Copely. It was a great performance from someone I had never heard of before.

In the course of the evictions de Merve inspects the shack of an alien who has been named ‘Christopher’ by the MSU, discovering suspicious materials including a container in which the aliens had previously been shown distilling a mysterious liquid. De Merve accidentally contaminates himself with some of the contents.

It’s from this point that District 9 begins to change gear. The documentary aspect falls away as we focus more and more on de Merve. During the evictions his arm was injured and bandaged. On returning home he falls ill, being taken to hospital that same night. The bandage is taken off and he is found to have developed an alien claw, the beginning of a metamorphosis that continues throughout the movie.

Taken into custody by MNU, now shown to be an unscrupulously wicked organisation, they propose to vivisect him, removing the alien parts which can operate sophisticated weaponry beyond the control of humans. But he escapes and teams up with Christopher. The canister, it turns out, contains a fuel which will enable the hidden alien command module to return to and reactivate the mother ship. In partnership, and in return for Christopher’s promised help in reversing the metamorphosis, they invade MNU headquarters and recover the canister. While there Christopher finds evidence that his people have been subject to vivisection and experimentation.

Having initially felt a vague sense of disgust at the sight-and the habits-of the aliens-my sympathies by this point moved in quite the opposite direction. The ‘insects’ are the humans. Yes, I know, this is one of the great wonders of cinema, the ability to manipulate emotion!

I don’t want to say too much more other than the subsequent adventures of de Merve and Christopher are intercut with more newsreel footage, concentrating on their pursuit and further developments in District 9. There is a happy ending of a sort, at least there is for Christopher if not de Merve. The whole thing kept me engaged throughout, fast-paced, highly dramatic and cleverly directed. It ended simply screaming for a sequel.

You’ve heard of racism; you’ve heard of xenophobia; now District 9 brings you both, combined as species-ism! And if alien ‘asylum seekers’ did arrive from across the universe this is most likely how they would be received, with suspicion turning to dislike turning to contempt turning to hate. I suppose it’s all a question of numbers-one alien is a wonder; a million aliens is a problem.
Posted by Anastasia F-B at 16:32