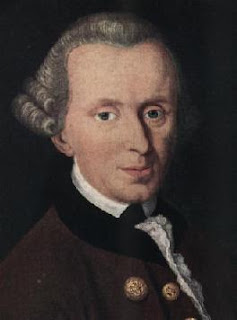 The important text here is Religion Within the Limits of Reason Alone, published in 1793, in which Kant takes up some of the themes touched on in the three Critiques. He concludes that Christian worship is no more important than any other form of religious belief;

Whether the hypocrite makes his legalistic visit to a church or a pilgrimage to the shrines of Loretto or Palestine, whether he brings his prayer formulas to the heavenly authorities by his lips or, like the Tibetan...does it by a prayer wheel, or whatever kind of surrogate for the moral service of God it may be, it is all worth just the same.

In other words the servile worship of God is no substitute, in Kant's mind, for the transcendental critique. The corollary is that morality does not need religion for its own service, "...but in virtue in pure practical Reason it is sufficient unto itself."

He also takes the Biblical figure of Job as a kind of forerunner of the Enlightenment, a man who speaks the way he thinks, caring nothing for false flattery. In the 1791 On the Failure of All Philosophical Attempts at Theodicy, Kant says that Job "...would most probably have experienced a nasty fate at the hands of any tribunal of dogmatic theologians, a synod, an inquisition, a pack of reverends, or any conspiracy of our day."
Posted by Anastasia F-B at 16:50