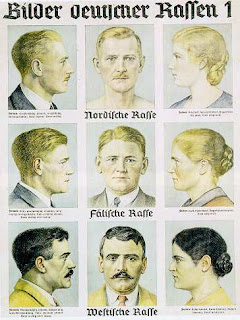 There is a lot of good academic monographs on this topic. One of the best I ever read, though slightly dated now, is The Aryan Myth-A History of Racist and Nationalist Ideas in Europe by Léon Poliakov.

The main thing to focus on is the rise of nationalism in the nineteenth century, in particular the development of specific national myths used to explain the alleged superiority of a particular community or people. The seminal work here is Arthur de Gobineau's 1855 Essay on the Inequality of the Human Races , where the Aryans, the speakers of Indo-European languages, were held to be responsible for all of humanity's greatest cultural achievments; and at the peak of the Aryan pyramid, in Gobineau's estimation, were the Germanic races of northern Europe. The greatest danger was that the 'purity' of this original race was subject to etiolation and dilution:

After passing through the age of the gods when it was absolutely pure; the age of the heroes, in which the mixtures were moderate in strength and number; the age of the nobility, where human faculties remained considerable though they could not be renewed from dried-up sources, it has descended, more or less swiftely according to the environment, to the final confusion of all the elements...The portion of Aryan blood, already subdivided so frequently, which still exists in our countries and which alone sustains the edifice of our society, advances daily towards our last frontier before total absorption.

As you can see, the myth is based on a descent from an original, and mythical racial Garden of Eden, a source of all purity, moving by stages towards contemporary anthropological and political realites. Of necessity it is a theory that has to be modified by practice and reality.

Over time it goes through many subdivisions, with the Nazis devising their own categories of superior and inferior, giving Gobineau's cultural model a specific biological twist. As you have quite rightly hinted, the whole theory is eclectic and selective, allowing people like Rosenberg to 'adopt' races like the Finns: even the Japanese were later described as 'honorary Aryans.'.

One of the best critiques of this whole pseudo-intellectual farrago puts the position as follows:

Naturally there is no such thing as a pure race, not even a Jewish one...Race: it is a sentiment, not a reality; it is 95% sentiment. I don't believe that it is possible to prove biologically that a race is more or less pure.

Who said this? Why, Benito Mussolini, in an interview given to the historian Emil Ludwig in 1932. He went on to say, soon after meeting Hitler for the first time, that if Nazi race theories were correct the only pure race in Europe was the Laps! :))
Posted by Anastasia F-B at 16:28