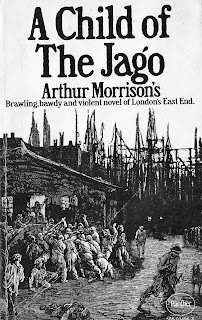 Slum fiction was a very popular literary genre in Victorian England. Poverty became a source of prurient entertainment; shocking for those who enjoyed being shocked! I cannot think of any better judgement on this whole literary trend than that passed by G. K. Chesterton-"The missionary comes to tell the poor man that he is in the same condition with all men. The journalist comes to tell other people how different the poor man is from everybody else."

Slun fiction was the literary version of the traditional 'good works' of the rich parish family, who dip into the poor homes with the obligatory 'basket' and just as quickly dip out again, with one important difference: the middle class readers of A Child of the Jago or Edwin Pugh's Tony Drum, a Cockney Boy, or Richard Whiteing's No. 5 John Street, bring no basket and do not dip, at least not in any practical sense. They read, they are shocked, they may even sympathise; but in the end they leave things pretty much as they are. Morrison is Dickens without the moral message, just as slum fiction is voyeurism without social purpose. So, I leave Chesterton with the last word on the whole slum fiction oeuvre, "They are not a description of the state of the slums. They are only a very dark and dreadful description of the state of the slummers
Posted by Anastasia F-B at 17:03