The Disc of the Sun: Egypt's Rebel Pharoh 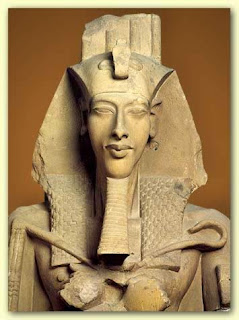 Akhenaten is, for me, by far the most fascinating of the Pharaohs. He was a man who turned a highly conservative society upside down in his determination to establish one god in heaven and one ruler on earth. The reaction against him after his death was so complete that even his name vanished from the record, along with el-Amara, the city he built and dedicated to the Aten, the Disc of the Sun.

To understand Akhenaten, to understand why he embarked on so disruptive a course of action, one has to appreciate that the Pharaohs were not all powerful, as commonly supposed. The history of the New Kingdom was dominated for long periods by a struggle between the temporal power of the king and the priestly power of Amun, the supreme deity. A hundred years or so before Akhenaton came to the throne the priests of Amun had even managed to block the elevation of Tuthmoses III, using Queen Hatshepsut as a front for their own assumption of power.

After this episode the Pharaohs prior to Akhenaten had placed increasing emphasis on the solar cult, almost as if a struggle in heaven was mirroring a struggle on earth. From the time of Tuthmosis IV the view was promoted that the Pharaoh’s soul was joined with the Aten, the disc of the Sun, the sentient energy of the god Ra. On Akhenaton’s succession the Aten was shown not as an embodied figure, but as a disc of pure energy, pouring its rays on the Pharaoh and his family.

Akhenaten initially tried to establish Thebes as the centre of the Aten cult, thereby replacing Amun, but decided against this, presumably because of the opposition from the priestly cast. Instead construction began further to the north on el-Amara, also to be known as Akhetaten-the Horizon of the Sun. The new cult was the cult of kingship itself. It was a revolution, and like many revolutions it was accompanied by a reign of terror.

Now secure in his new capital Akhenaten began a systematic purge of the old gods, one that reached deep into all corners of Egyptian society. The name of Amun was not only removed from all public monuments, but from intimate household objects, like pots and scarabs. The Pharaohs guards were everywhere, ensuring the destruction of the old and the observance of the new.

But the Aten went down just as quickly as it had risen. The Pharaoh died in the seventeenth year of his reign, power passing to Nefertiti, the Queen-Regent. Egypt had suffered greatly during the upheavals of Akhenaten’s reign, both in economic and in spiritual terms. The cult of Amun was put back in place. The day of the Aten was over.
Posted by Anastasia F-B at 17:17