Prostitution in the Middle Ages 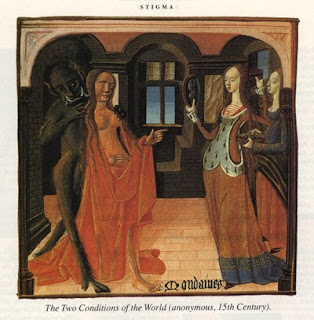 London's licensed brothels, located in a street known as Bankside, upstream from London Bridge, were all closed in 1546. Some of these establishments dated at least as far back as the fourteenth century, perhaps even all the way back to the twelfth century, to the reign of Henry II. Indeed, up to the Reformation, the whole practice of prostitution was tolerated and regulated, though brothels tended to be consigned to the fringes of town, along with the leper houses. The women were usually supervised by some public functionary. In Paris he was known as le roi des ribauds-the king of the ribalds. In Geneva, in contrast, the women were allowed to regulate themselves, appointing their own la reine du bordel-queen of the brothel.

The Medieval Church certainly viewed fornication as a mortal sin-and people may remember Chaucer's Summoner, always on the quest for 'bawdy women'-though, in practice, the clerical authorities took a fairly liberal approach when it came to the whole question of enforcement. This involved acceptance of licensed brothels as a 'necessary evil'. Thomas of Chobham was prepared to allow that the closure of such establishments might lead to even greater offenses. Even St. Augustine of Hippo, one of the greatest of the Church Fathers, took the same pragmatic view, saying that "If you do away with harlots, the world will be consumed with lust." For Thomas Aquinas prostitution was likened to a sewer in a palace; take it away and the building would fill with pollution. As Thomas viewed it, a world without prostitutes was a world full of sodomites, by far the greatest offense!

So, for both Church and State, the message was disapproval but acceptance. The Reformers brought disapproval and suppression, part of a more general attack of the lax moral standards of the old Catholic world. Prostitution survived, of course, but under increasingly adverse conditions. But the old world had ended; the world of Falstaff, of the Merry Wives of Windsor, of Nell Quickly, swept away by a new Puritanism, depicted by Shakespeare at the end of Henry IV Part II, when Henry V decides to clear the whores from Cheapside.
Posted by Anastasia F-B at 16:10